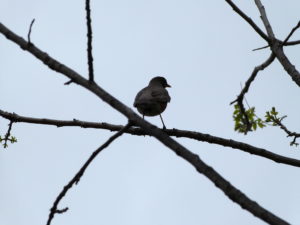 It’s a windy day full of movement and sound and new bird tweets and whistles. The flag pole lines are flapping. A dog barks off in the distance. The motion and engine and muffler noises of vehicles rise over the fence and blend with the moaning of the wind. The furnace ticks in the corner trying to decide whether to come back on or not—then decides to blow—with a preamble that is all sound, sound like a motor revving up, the prelude to heat and the air that carries it.

Oh my gosh, there are buds! I can see them from the cabin window, peaking out between two big trees. New growth. Suddenly, I notice that there’s green moss here and there. Now it’s the feel of the day. It is a “sudden” sort of day.

This day reminds me of those things that are “all of a sudden” . . . and yet not. Like a new baby. Like an idea. Like inspiration. Like feelings that well up. Like certainty. There is an arising of all these states of being, an arising that starts before they’re noticed, before they erupt, before they . . . arrive.

We begin A Course of Love with a call for “willingness:”

Willingness does not arise from conviction but brings conviction. Willingness is your declaration of openness, not

As was said within A Course of Love, willingness does not require conviction but leads to conviction. The apostles had no faith in their ability to perform miracles. The faith they showed was in their willingness to try. This little willingness gave way to conviction as miracles flowed through them as the blessings that they are. T1:3.10

We have talked before of conviction and your willingness to, like the apostles, let your conviction spring from your willingness to experience its cause and its effect. I am asking you now to be willing to move from conviction to reliance. I am not asking you to do this today … I am merely making you aware of this difference. . . . I am giving you cause for movement, the effect of which will be the movement from conviction to reliance. D:Day10.3

Most of our major Aha! moments start long before they arrive. They don’t seem to at first, but at some point, you and I can become aware of the movement that has taken us to where we are. When this happens to me I love to see this very movement described in A Course of Love. I don’t see this movement as meant to be followed like a roadmap, but as one that does exactly as it says it does: leads from willingness, to conviction, to reliance (and these words could be replaced by many other words that convey our many and varied movements). Maybe they are steps along the way, but they are not laid out in a way meant to be taken as steps. They are like ideas planted, ideas that “all of a sudden” come into their time of fullness. And then, as is said in A Treatise on Unity and its Recognition, what has been gained “becomes simply an aspect of your identity and accepted as the nature of who you are in truth.” (T2:7.21)

Reaching the nature of who we are in truth is our dream, our solace. It is our recognition that there is no outside source. It is a recognition that can come “all of a sudden,” and still be one that has grown like new buds, from all that has been planted within us. These are the fruits we reap for having taken the truths of this course deep within us and having surrendered to their power.

“All of a sudden,” is the surprise and delight of our Aha moments.