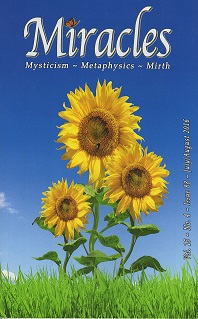 By Glenn Hovemann, Published in the July/August 2016 issue of Miracles Magazine

Several Miracles teachers recently have circulated and re-circulated material that compares A Course in Miracles (ACIM) with A Course of Love (ACOL) and claims the latter to be a “regression” and an “attempt to preserve some value for the individual self and body.” I was surprised, yet I welcome a conversation that leads to better understanding. It’s an opportunity for sharing love and dialogue.

Fifty years ago Jesus dictated 1,250 magnificent pages to Helen Schucman. When ACIM came into my life in 1978 I knew in my bones that it was true. Over the years it ignited a spiritual revolution. Why dictate another 700 pages to Mari Perron? Why did he give it such a similar title as “A Course of Love”? Why did he call it a “continuation”? And because ACOL is obviously not merely a restatement of ACIM, what’s going on?

Before attempting to answer these questions, it may be helpful to review a few of the ways in which the two courses are closely related. In both Courses, Jesus presents himself as the Source. Both scribes, Helen Schucman and Mari Perron, describe extraordinary events surrounding their transmission. Neither woman could possibly have authored such a work on her own. Ultimately the authenticity of channeled material—or any spiritual teaching— is a matter of inner knowing. Based on my experience, I accept both ACIM and ACOL as being of equal authenticity. Increasing thousands of others do too.

Both Courses are of the same tradition. Both use identical, specialized terminology to convey key themes. Both refer to the ego “making” its world through “projection,” as contrasted with Spirit “creating” by “extending” itself. Similarly, ACIM’s solution to sin is to “forgive the Son of God for what he did not do.” As ACOL puts it, True forgiveness simply looks past illusion to the truth where there are no sins to be forgiven, no wrongs to be pardoned. C:16.12.(For ease of reading all direct quotes from ACOL are in italics.)

Both Courses assert that we are ideas of God, including the notion that God the Father is an idea. ACIM: “What you find difficult to accept is the fact that, like your Father, you are an idea.” (T-15.VI.5) ACOL: God created you with a thought or idea [and] you created the ego with a thought or an idea. T3:7.2 As we know, ideas leave not their source.

Both Courses speak of Christ as the identity we share. ACIM: “Christ is God’s Son as He created Him. He is the Self we share, uniting us with one another, and with God as well.” (W-pII.6:1) ACOL: The Christ in you is your shared identity. C:P.39

Both speak of the great diversity of creation. ACIM: “Creation is the sum of all God’s Thoughts, in number infinite, and everywhere without limit.” (W-pII.11:1) ACOL: Expressions of love are as innumerable as the stars in the universe, as bountiful as beauty, as many-faceted as the gems of the earth. I say again that sameness is not a sentence to mediocrity or uniformity. You are a unique expression of the selfsame love that exists in all creation. C:20.30

These meanings are identical, and core to both Courses.

The original Course did not present itself as the final word. In the Epilogue of the Workbook it says, “This course is a beginning, not an end.” And referring to the Holy Spirit, it adds, “And now I place you in His hands, to be his faithful follower… Let Him prepare you further.” (W-Epilogue.1,4)

Fifty years ago ego-consciousness was deeply entrenched. ACIM arrived and did the heavy lifting. According to ACOL the original Course opened a door by threatening the ego. C:P.5 The work is not complete, however, simply because we have yet to fully accept our identity as Christ. We have yet to fully accept—and thus experience—our completion. In other words, we have yet to go “beyond learning.” Going beyond learning was the accomplishment intended by ACIM. As Lesson 169 says, “The final step must go beyond all learning.” What goes beyond learning, it says, is grace, the knowing that comes through the acceptance of the love of God. ACOL says, While you continue to put effort into learning what cannot be learned, as you continue to see yourself as a student seeking to acquire what you do not yet have, you cannot recognize the unity in which you exist and be freed from learning forever. A.4 Adherence to a pattern of learning that once served us, and our failure to recognize unity, it says, is the only reason for this continuation of the coursework provided in A Course in Miracles. A.4 (emphasis added)

How many people apply themselves studiously to the Course? I have long been one of them. And I have to admit that despite decades of study, prayer, some stillness of mind, and much greater peace, I still felt “something missing.” We are trained since kindergarten to be students, to be learners. Education sits atop a very high pedestal in our society. Alas, knowledge does not bring us Home. Knowing does. Experience does.

Jesus’ new Course is designed not for the mind, which we so often equate with learning, but for the heart, which already knows. It is not a way of thought and effort but a way of feeling, of ease, and of direct relationship. A.4 This kind of effortless learning and feeling is different from that to which we are accustomed.

ACOL is a spiritual transmission in the form of a book. Be prepared to read it with a different style, a different attitude. If approached like a textbook, with the head leading the way—don’t bother! If ACOL is approached mentally, with eyes on the rearview mirror to compare it with ACIM, it may confuse you. Numerous times in ACOL, Jesus pleads, as in this passage: As you read, be aware of your heart, for this is where this learning enters and will stay. Your heart is now your eyes and ears… The only change in thinking you are asked to make is to realize that you do not need it. C:3.14

ACOL does not speak to the ego-mind. That would be futile. Nor does it speak to the spirit, which needs no instruction. Rather it is addressed to “the Christ in you” to awaken the forgotten Christ-consciousness. The Christ in you is that which is capable of learning in human form what it means to be a child of God. C:P.7 But it takes considerable willingness to delve deeply into another lengthy Course with an innocent mind that can, at least for a while, suspend judgment and say, “I do not know.”

The joining of heaven and earth has always been Jesus’ goal, as in his Lord’s Prayer—“Thy Kingdom come, Thy will be done, on earth as it is in heaven.” ACIM says, “‘Heaven and earth shall pass away’ means that they will not continue to exist as separate states.” (T-1.III.2) It does not elaborate exactly how heaven and earth will “continue to exist” inseparably, however. ACIM is often interpreted to mean that all form is illusion, which implies that earth shall simply pass away and not join with heaven. ACOL, on the other hand, clearly states that form has an important, continuing role in the Atonement, and that to consider all form as illusory is an erroneous interpretation—that form itself is neutral, and what is illusory is the erroneous perception of form.
• [T]he mind…has stood between you and your own inner knowing, caught in a dream of perception.A.19
• [Y]our perception created an unreal reality of the separate and unloved, often referred to as hell or hell on earth. D:Day16.15
• Christ-consciousness replaces perception with knowing. D:Day12.7
• True vision sees life-everlasting where perception but saw finite life and mortal bodies. T4:4.14

As Miracles students well know, ACIM repeatedly uses comparison as a teaching technique. Again and again it compares the real to the unreal, the false to the true, and fear to love, to point out the insanity of the ego’s perception. In ACOL Jesus reflects on his own prior teaching style, and says: For some of you the repetition of the properties of the false that aided your learning [in ACIM] may now work as a detriment to your acceptance as you cling to ideas concerning false representation rather than let them go in order to embrace true representation. In the time of learning, you were so entrenched in your false beliefs that their insanity needed to be stated and stated again. But as we enter this new time of elevated form, these same ideas—ideas that many of you attached to form rather than to your perception of form—must be rejected. D:6.2 (emphasis added)

Certainly there are points of potential confusion between the Courses. For example, ACIM says, “The ‘reality’ of death is firmly rooted in the belief that God’s Son is a body. And if God created bodies, death would indeed be real. But God would not be loving.” To the ego’s perception, death is very real but is actually illusory. Yet the Christ, as Jesus bodily demonstrated, is not subject to death and is not illusory. It is this Christ Self that ACOL variously refers to as “spirit resurrected in form,” “the ascension of the body,” or, most commonly, as “the elevated Self of form.”

In my opinion, ACOL does not contradict ACIM, but provides additional perspectives which can give rise to a deeper understanding. One of those perspectives concerns the body and physicality: It invites an experience of truth—freedom, joy, light—that can only be had by knowing we are NOT bodies—even while we have them! The body has become a helpmate.

As I write I am keenly aware of the poverty of words. I have sought to resolve an apparent contradiction by using the tools of the “old mind,” the habitual mind that slices and dices, that perpetually compares and interprets, the mind that is always seeking something. A better way can only be hinted at, what Jesus explains in detail as the art of thought. The art of thought is a gift arising from within. It encompasses both wholeness and relationship. It IS the miracle of seeing differently.

Jesus is very keen for us to choose Christ-consciousness—the experience of unity—now, in this lifetime. From the beginning of my immersion in ACOL, and with every reading, I have the palpable sense of Jesus’ delight that his mission is reaching a crescendo, a point of no return. We are on the cusp of something genuinely new, something earth has never before seen. In ACOL he presents a portal to love, which cannot be taught but can be experienced as our true identity, and shared. Thus his Courses evolve in strength and beauty.

A Course of Love does not preserve a domain for the ego. Rather, it calls us to our inheritance that lies beyond ego. Am I suggesting that ACOL is a necessary “next step” for all Miracles students? No—only that truth seekers decide for themselves, led by the heart rather than the mind.

Glenn Hovemann, a Miracles student since 1978, is editor of Take Heart Publications, publisher of A Course of Love. He wishes to acknowledge the encouragement and generous assistance of Laurel Elstrom, Celia Hales, Heather Holmes, Michael Mark, Mari Perron, and Christina Strutt with this article.