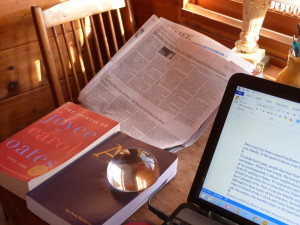 Discovery has been a grand facilitator of the human spirit’s quest for the truth and is part of what brought you, finally, to the quest to know your Self. D:6.13

I wonder how many people find that their Sunday mornings still include sitting around reading the newspaper. When I was young, the newspaper and church defined Sunday mornings. Back in the 1960’s in my predominately Catholic neighborhood (and city for that matter), there were many times to choose from for getting to Mass. We had pretty much settled on the 12:45 Mass but there were times when we sat around in our robes for so long that we’d have to hustle to get to the latest Mass available, 1:00 Mass at the Cathedral of St. Paul. Even the Sunday mornings of my own children took place in the same manner, although by then, many of the churches, including ours, only offered two Masses. During those years, we went to church at ten o’clock and came home after to read the paper. Whether it was the TV Guide, the ads, the comics, the weather page, or the hard news, there was something for everyone.

It took a while to find it, but the answer to when Saturday evening masses began to be held was January of 1970. The definition of evening was after 4 p.m. I also learned that before 1953, Mass could not be celebrated after 12 noon.

Now…why did I get started on this exploration? It was from reading the paper, of course, and in particular came from reading a column called “The Blundering Gardener.” The woman who writes the column, Bonnie Blodgett was speaking of a new book called “Make It Stick,” by St. Paul author Peter Brown. It’s his attempt to translate the findings of “eminent memory researchers into plain English.” He interviewed her for the book and she writes, “Brown is convinced that blundering is the real key to my success at accumulating knowledge and “making it stick.”

I walked out to the cabin with this on my mind, and in the process of getting myself sat down

and my computer plugged in, immediately knocked over a paperweight that had been holding open the Journals of Joyce Carol Oates, which I’ve written of before. The book’s pages number 495 before the index, but it’s a bigger book than A Course of Love. The paperweight broke in two parts. What fell out of the bottom was a picture of St. Catherine’s Court. Without it being taped onto the felt base, my paperweight suddenly became a clear magnifying glass. Much better! My blundering worked to my benefit.

This has happened many times in much more profound ways. It’s part of what I mean when I speak of things “coming to me.” I’d say it’s also part of the way of discovery that replaces the old style of learning by the time we reach the end of A Course of Love. When you’re intent on learning something specific, you can miss a lot of discoveries along the way. If you’re afraid to make blunders, you might not discover what you would by being open to what the gardener refers to as “trial and error.”

Peter Brown suggested that Bonnie’s habit of jumping into projects before properly researching the how-to part, helped her to retain what she learned (or discovered) in this way, and kept her from dropping new projects in fits of futility. In other words, the “how to” books can make whatever you’re hoping to learn so complicated and copious that you give up.

It’s just another example of the practicality as well as wisdom offered in this Course. The end of learning is a major theme of A Course of Love for a reason. What have we learned? What has been gained through all our learning and effort? What have we accepted as true because those “in the know” have said it is true?