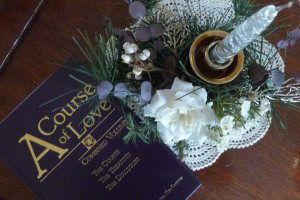 Little can be had without desire. Desire, unlike want, asks for a response rather than a provision. Desire is a longing for, a stretching out for. . . . It acknowledges a certain “taking over” of the spirit of desire. Having “arrived,” the desire to “get there” has not been satiated but only has grown into something different. With having arrived comes the “presence” of Self so long awaited. . . .(D:17.3 & 5)

I started my trip to my mom’s yesterday with errands and, by the time I was on my way to her place, snow 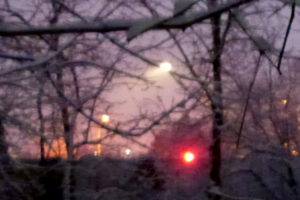 was turning the late afternoon into the first winter-white day of the year. As I drove, I began to feel the different sort of Christmas spirit that comes for me with snow. There was something very fine about being out in the dark with the newly falling flakes and its accumulation. The street lights and even the neon of shops took on a remembered glory, a glimmer. It was dazzling on its own, but I knew that loving it so was also tinged with memories from childhood—not just of Christmas—but Christmas too.

My mom has told me my first words were “pretty lights” said about my first Christmas tree. Seeing the holiday lights—yes, this was magical, but also, at this “low light” time of year—an early morning drive to church, or later catching the city bus to school in the quiet sparkle of winter’s light, and the evenings preceding or following snow days, looking out the window with almost impassable snow surrounding the house—all of these would find in me the same response of wonder. My little brother and I especially shared that fascination for the snow and the way the light of our world was different due to it.

Before heading out yesterday I’d been feeling a little irritated with the way this “season” has of taking over everything. Suddenly this seemed the whole point! Whether the way of “taking over” is one of contemplating the mystery of the birth of the Christ child, the Christ in us, or of decorating or gifting, the feeling of being “taken over” by something other than “the usual” is welcome. Letting something “take us over” is a longed-for departure from ordinary days, a known part of the creative process, and at times a spiritual grace.

This reverie led me to a contemplation of “possession” as it’s used in A Course of Love. As Jesus acknowledges “a certain taking over” of “the spirit of desire,” I saw this as one of the ways that the word “possession” is often seen: You’ve been taken over. You’re possessed.

You could see long-lines and frantic scurrying to “buy” as signs of being “possessed” by “possessions,” and rightly wonder if there is such a thing as “healthy” or even spiritual possession. Is there? In A Course of Love, the answer is “Yes.”

We start out on our journey with Jesus telling us, “You are an immigrant coming to a New World with all your possessions in hand. But as you glimpse what was once a distant shore and now is near, you realize none of what you formerly possessed and called your treasures are needed.” C:1.7

He speaks of our usual way of interpreting possessions in his chapter on the Prodigal and in other places too, as all that we’ve “thought” we needed. But as we reach the Course’s end, new meaning is given.

In Day 38 of The Dialogues we hear: 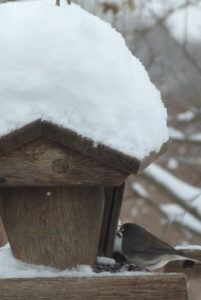 acceptances that bring peace and meaning to us. The depth of meaning found in embracing all that would take you and me out of “life as usual” could be seen as one of the gifts of being possessed by (or of) wholeheartedness and its grace. (Another way to say it would be, “If you’re not going to do what you’re doing with wholeheartedness and grace, why do it?)

Of course, there’s a much bigger meaning in embracing our beloved and our belovedness, but sometimes there doesn’t seem to be a much “bigger” acceptance than that of our own ways of being and living. It’s in these smaller ways that we find the inner peace that expands from there.

It is with joy that I find myself fully accepting being possessed by the wonder of city streets in winter’s darkness as well as all that goes on, both inside me and outside my window, in the early hours of contemplation. There are many ways to visit “time outside of time.” Many ways to embrace our seasons and our reveries of all that is sacred. Our possession in this way is also a being possessed. This is my wish for you in all “your” ways and seasons.