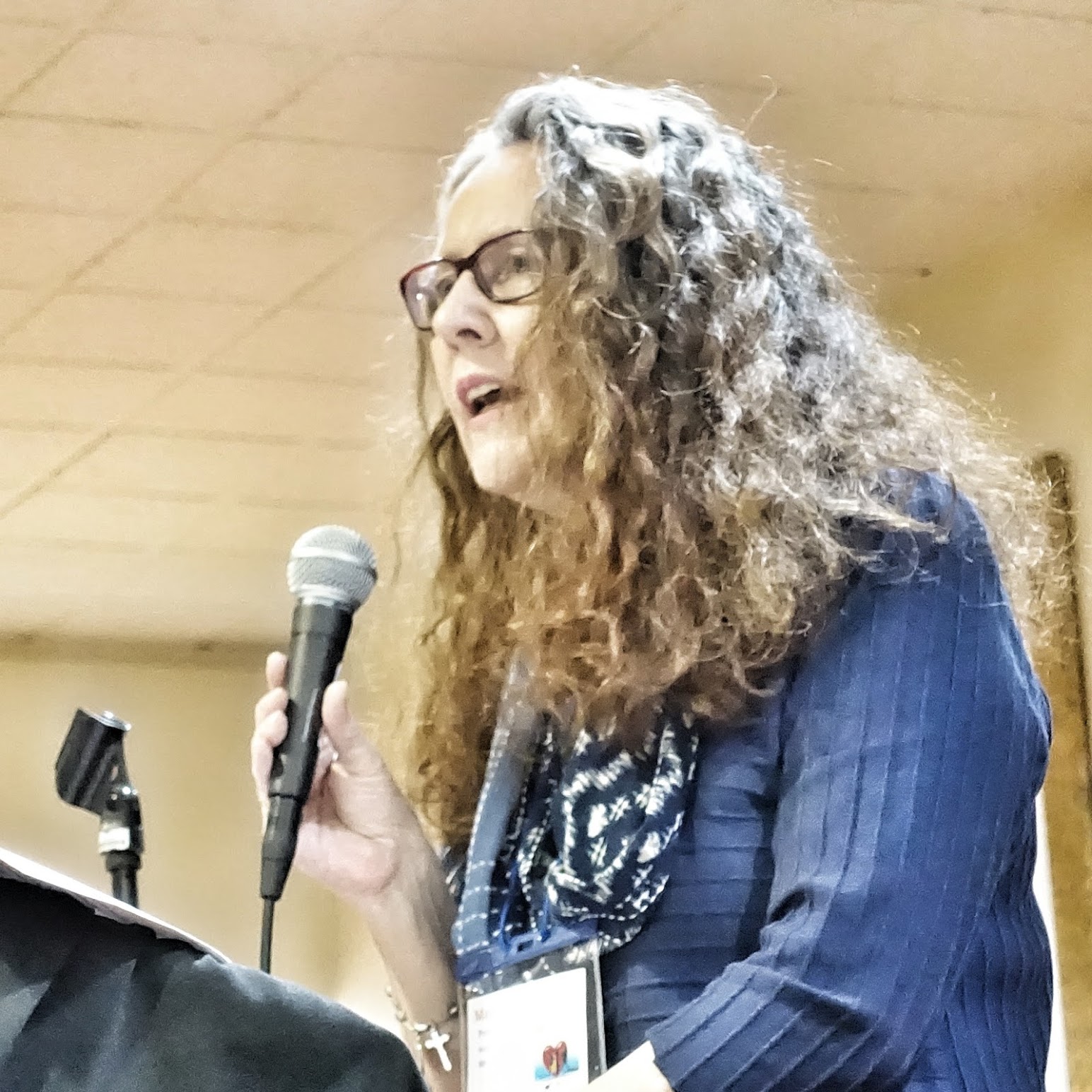 Mari speaking at the ACIM conference in San Francisco

Dear friends of A Course of Love,

I’d like to share a few reflections about this past weekend’s ACIM conference in San Francisco organized by the Community Miracles Center and the inimitable Rev. Tony Ponticello.

ACOL is still very much in the early stages of “coming out” to the ACIM community. Naturally, there has been a mixture of acceptance and resistance to this “new Course” from Jesus. Overall, from what I experienced at the conference, I think it’s fair to say that ACOL is moving quickly toward recognition and active engagement within the ACIM community. I think it’s inevitable that ACOL will take its place as a sequel to and clarifier of ACIM. The stage is being set for another big step forward at the next conference, which will be in Boston in 2018.

As expected, Mari gave two 75-minute presentations. Both were excellent and each was quite different from the other. Both were very well received. In addition, she had the opportunity to address the entire conference —there were about 250 people in attendance—for 8 minutes. She did so in a charming, personal manner, speaking of how ACOL came to her. Quite a few people expressed strong interest in dialogue. As you may know, Mari is particularly interested in encouraging “Dialogue” — what Jesus asks us to participate in, in Unity (Oneness) and Relationship. He says:

Entering the dialogue is akin to residing in the present moment and to hearing all that is being spoken in all the ways it is being spoken. Now is the time to truly begin to “hear” my voice in every aspect of creation and to respond with your own voice in all of your own acts of creation. It is time to realize that you are a creator. (A.38)

Unexpectedly, Rev. Tony went off-script for several minutes in front of the entire conference and said how he is studying ACOL! He particularly mentioned how ACOL speaks of an end to the time of learning, and quoted ACIM saying the same thing. It was a huge, unsolicited boost for awareness of ACOL. Many other presenters were friendly and encouraging.

We had many occasions to deepen our wonderful connection with Jon Mundy, publisher of Miracles Magazine, who has so warmly welcomed ACOL to its pages. We wondered how his readership would respond to his announcement in the Nov-Dec issue that he would be incorporating articles about ACOL in upcoming issues. He says that he has received some negative feedback, but most responses are positive.

We also got to meet and have a couple of dinners with the people behind the Course in Miracles Society (CIMS), Rev. Reja Joy Green, her husband Chris, and Tom Whitmore, publishers of the Original (“Pearl”) Edition of ACIM. They are outstandingly supportive! They really understand how ACIM and ACOL are inextricably connected. Did you know that CIMS’ Original Edition of ACIM uses the word “soul” numerous times? That word was removed long ago from the standard Foundation for Inner Peace (FIP) edition. Of course, the inclusion of “soul” in ACIM supports ACOL’s concept of divine individuation and the personal Self — and the elevated Self of form.

There were important personal connections too. For example, Tamara Morgan (Judy Skutch’s daughter), Co-President of FIP, made a point of coming over to Mari with a very sweet, warm greeting and told Mari that she was “authentic.” That’s a significant statement coming from a Co-President of FIP! The other Co-President,  Dr. Bob Rosenthal (who wrote the critical Amazon review of ACOL that has been widely broadcast by Gary Renard) made a really nice connection with me. These are important personal relationships that augur well.

A close companion throughout the event was Rose Gannon, who was connecting, connecting, always connecting, in her important role as overseer of social networking for ACOL. By the way, Rose’s unofficial title is Director of Conscious Non-Planning! Rose made arrangements for a volunteer professional videographer, Lorraine Haataia, to be present at Mari’s first presentation. After I met Lorraine in Utah last summer, she discovered and fell in love with ACOL. Lorraine’s video of Mari is surely a huge step up from our cell phone cameras! Lorraine was beautifully supportive and what she offers can go far toward reaching others.

We also got the opportunity to meet and love Lee Flynn. Lee is truly a scholar of both ACIM and ACOL. He spends many hours every day with ACIM and ACOL groups. Lee is 100% devoted to bringing Christ consciousness forward, and is in the perfect position to help bridge the perceived gap between the two works, upon which some people stumble. He and Mari and I will be working closely together to develop a small “library” addressing such questions as, “Is ACOL really a ‘continuation’ of ACIM?” and “Why does ACOL assert that the time of the Holy Spirit has ended, when the Holy Spirit is so integral to ACIM?” And we will probably be more prominent with material drawn from both Courses, such as:

ACIM: Nothing real can be threatened. Nothing unreal exists. Herein lies the peace of God.

ACOL: Everything real is of God. Nothing unreal exists. Love is all there is.

A delightful surprise was the presence of James Kelly, who flew from Scotland. James is the creator and publisher of two ACIM-based “Miracles Games,” a board game and a card game. Now he is developing a game based on ACOL too! He showed us an early prototype of the game, which he is calling “Revelation.” Wow, isn’t that cool? In addition, James is keenly interested in creating virtual international conferences that would help bridge the perceived “continuity gap” between ACIM and ACOL.

A pleasant surprise was in store for me when Peter Boquist of Stockholm introduced himself. Peter is a potential publisher of ACOL in Sweden, where the translation has just been completed. We had a very nice connection and enjoyed a bit of publisher “shop talk.”

Those are just a few of my highlights from a weekend in which I reunited with friends and discovered many more.

Lorraine took a photo of Mari and Jon Mundy to help promote the May event in Philadelphia. Take a look— I think it’s both sophisticated and edgy. 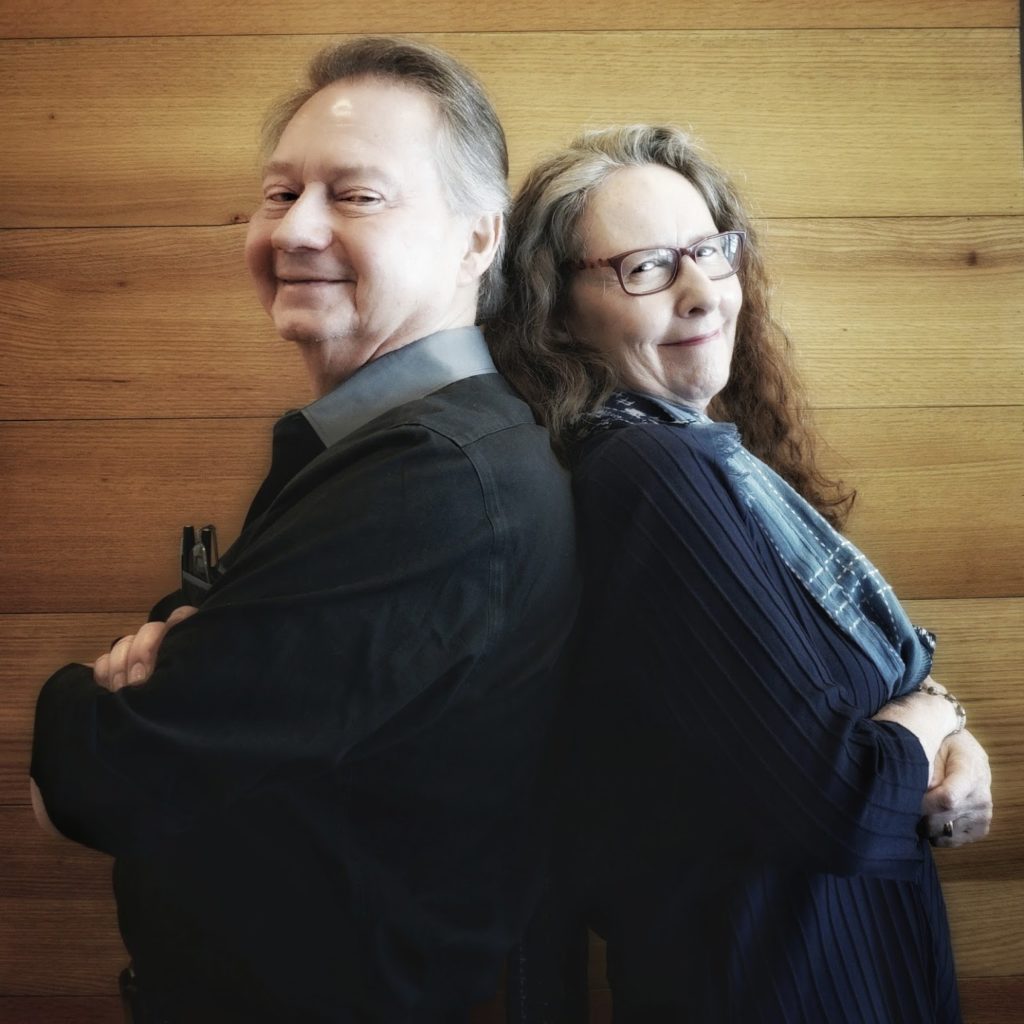 Love is all there is,  Glenn
Glenn HovemannTake Heart Publications Publisher of A Course of LoveLetting go of what your mind would tell you in favor of what your heart already knows is but the purpose of this Course.