Season change: when the birds yell and the cows lie down 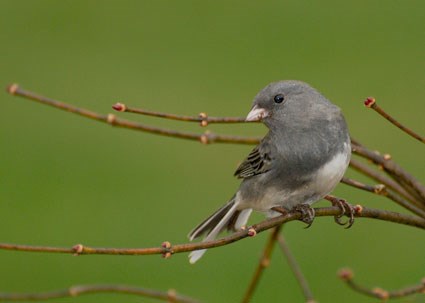 There’s been a new chattering in the yard, a loud chorus, as if a whole new group of birds moved in when I wasn’t looking. That’s exactly what happened! The dark-eyed Juncos are back. The males are loud enough to be heard from several hundred feet away but I’ve found that Juncos have both a loud and a quiet song. The quiet – a series of whistles, trills, and warbles – only carries about 40 feet. I must have had a bunch of males claiming their territory.

I looked them up after pausing, on my way out to the cabin this afternoon, to see who was making all the racket. It didn’t take long to spot the Juncos. As I walked, they flitted up out of the leaves, their white tail feathers flashing. From the website above, I found that they live on forest floors of the western mountains and Canada but flood North America for winter. I knew they were Juncos right away, but went on-line to see if I could find a site with a recording of their song (this one has it). There were other birds in the yard, and I wanted to know which were doing all the singing. As soon as I heard the recording it was obvious that the Juncos were the source.

When I heard the new birds, I thought right away about the season change. I always figure the birds know more than we do about the coming of weather.  Maybe the newspaper will be reporting cooler temperatures tomorrow.

My dad used to say that if you passed cows lying down in a field, there was a storm coming. I love the kinds of “news” you pick up through observation.

Could it be like a seasonal change and nothing to get alarmed about?  The coming of those things, those changes, that will be what they will be but nonetheless effect us, like the weather and the storm do the Juncos and the cows?

With interrelatedness, this confusion is so mortifyingly human.  There are times you don’t know when to lie down and when to sing loudly. Sometimes it’s the pits and makes me wish that I had no mechanism in me through which what is natural could be turned off like water from a spigot.  I wish that, like a bird, or a cow, there was nothing in me other than an indisputable instinct to migrate, or to get my feet under me in a storm.

And then of course, in another day, when the doubting mood has left me, I’m awfully glad to be as I am, doubt and all.

It’s said in the course that all fear is doubt about yourself. I’ve never gotten much of a “charge” out of the word fear and for whatever reason haven’t felt myself to be a fearful person. But doubt carries a real charge and I can see what is meant. When I’m in one of my doubtful moods, even if I don’t feel fearful, I am more or less paralyzed. I don’t feel comfortable enough to be myself and that’s when I fall away from trusting and feel lost in confusion.

Still and all, confusion has been a good friend to me. It causes me to question myself, and I am, if not comfortable with it, accepting of the discomfort  (even when I bitch and whine about it).

Margaret Wheatly spoke of this years ago in her book “Turning to one another: simple conversations to restore hope to the future.”  I remember reading this sentence with surprise at its truth: “As we work together to restore hope to the future, we need to include a new and strange ally – our willingness to be disturbed.” I recall how I thought People no longer want to be disturbed. I didn’t think it applied to me, of course…but it does!

Now I’m getting psyched at this new idea of separating the dreaded doubt from the challenges of change, and the willingness to be disturbed. It’s such an easy to miss distinction that I haven’t seen it…haven’t seen that I don’t need to doubt myself in order to let in new insights or navigate transitions. What a revelation!

What a season change!