Expanding Our View of Ourselves . . . with Yes

I’m in a “yes” year. I came up with the idea of having a year in which I’d say “Yes” to all that this Course would bring me before I heard that Shonda Rhimes had already coined the phrase a “yes year.” Rhimes is the producer of some of the most popular television shows still on the major channels, and her book, which a friend sent me after I’d used her phrase, is called The Year of Yes.* The book is largely about how terrified Shonda was of things like public speaking, and how ill-suited she was to taking praise or acknowledging her own accomplishments. It spoke to me … and it was funny. I was talking of it while getting a haircut when Tina, the absolutely lovely, smart, funny, beautiful, long-time business woman who is my stylist, said how like that she is. I never would have guessed it. Many of us are “like” Shonda describes herself prior to her “yes year.” Like Shonda, we have a limited view of ourselves.

A Course of Love is full of messages asking us to break free of those limited views. You could almost say that taking us beyond our “limited view” of who we are is its main theme. It starts right in the Prelude when we hear that what we’re going to be about is identifying ourselves correctly. We are not the limited selves we have thought ourselves to be. In the second chapter of The Course, Jesus links 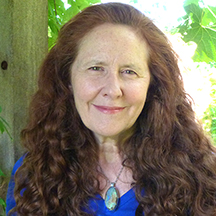 this theme to love: Love is not something you do. It is what you are. (C2.6) As we proceed, there is often inclusion of our humanity at the same time that there is a call beyond its limits: While you would not be other than who you are, who you are is not limited to the concept of human being nor to the laws of man. (C:15.17)

Later, as we move beyond learning and beyond our identity of ourselves as learners, we begin to reach the limit of our “time-bound consciousness,” and are asked to embrace our “eternal” consciousness, even while in form. (T3:12.4) The prelude to my “yes year” was agreeing to speak at the Community Miracle Center’s 2016 ACIM convention in Las Vegas, which I looked forward to with equal parts anticipation and dread. The whole mystique of Vegas, large rooms, and people counting on me made my mind race and my heart flutter. But when a few more invitations came in, I felt like I was being called “out” of my quiet life and decided I would give it a try.

After I’d agreed to the ACIM conference I was invited to St. Louis. And so my year began in St. Louis in March. After the ACIM conference in April I visited four groups in California. A few weeks ago I was in Santa Fe. I’ll be in Sedona in October. A February visit to Philadelphia will close out my yes year beautifully.

I can tell you right now that my view of myself did expand. My view of what I can do, of my capableness, of my ability to open further and share my heart more widely, of being a person who can call upon the energy to get myself to do and enjoy those things I never thought I could. The people I’ve met were a big part of assuring me that this is so. They were the highlight, stunning in their diversity and unified in their desire to come home to the heart. Their explorations were individually unique and universally inspiring. Some were finding a new appreciation of ACIM. Some were seeing a trilogy in ACIM, ACOL and Way of Mastery. Some were fascinated by the Way of Mary and embracing feminine qualities and ways of being. Some were finding the language of love and the return to feelings quite challenging. In all there was a sense of break-through and with more to come, as if limits were everywhere being lifted.

Quite fittingly, “dialogue” was the pulsing undercurrent, the bubbling up, the call to self-expression and union in relationship. Everywhere I went I felt a sense of joining, almost of partnership, and a recognition of moving together into the “new,” a place that, as my friend Janet Berkowitz said, “There are few words for. You just know it when you see it.”

A Course of Love gives us a vision of what is possible.

*Year of Yes: How to Dance It Out, Stand In the Sun and Be Your Own Person

Sylvia is a facilitator for ACOL in Michigan and often composes poems and songs based on ACIM and ACOL. She says: I loved the metamorphis message – perfect explanation of my journey. Take Heart every single sacred second. http://www.sylviasstudio.com/