Dropping From a Tree Into the Arms of God

For more than a decade, I regularly played with children.

The term ‘original play’ was coined by Dr. O. Fred Donaldson, who discovered that what little children – and animals – do is intrinsically very different from what adults generally call ‘play’. In contrast to what he called ‘cultural play’, there is no competition, conquest, winning or losing in original play.

I applied what I learned from Fred mainly at a preschool in Pretoria, where I became the official ‘playmate’ of the school.

The nature of original or authentic play is what it is because of the subliminal metamessages (messages that qualify other messages) that emerge during play: “You are valuable” and “There is nothing to fear.” It did not take me long to realize that these metamessages are exactly the same as those of A Course in Miracles and A Course of Love! The direct result of such play is trust. 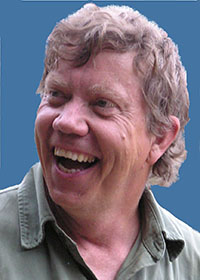 At times playing with the children has the effect of a complete loss of all sense of time and space, and my body merely becomes an instrument for Play itself. It is an experience of indescribable bliss. The same seems to apply to the children, who trusted me ever more deeply.

Once when I stood under a mulberry tree that the children loved to climb in, a child suddenly dropped out of the tree. In an instantaneous reaction I caught her.

Was she frightened? No! She laughed! She had done it on purpose. Without feeling the need to warn me, she knew with absolute certainty that she would be caught! She understood in the depth of her being the words in A Course of Love: I am safe, and nothing that I do or do not do will threaten my safety. (T3:13.8) She lived by the Truth. No wonder Jesus referred to children when he spoke of the kingdom of heaven!

It’s amazing how the ego simply cannot conceive of such trust. Once, after I had told this story at a meeting of people that were questioning religious dogma, a man asked me: “Now what are you actually trying to say?” Yet when we left the room a woman came to me and said, “You are light years ahead of us.” She had understood with the heart—and that understanding in effect canceled her own statement!

That little girl, whose name I can’t even remember, epitomized trust for me. Often, when things seem to go horribly wrong, I think of her. Just imagining myself as this child falling down in absolute trust often has an immediate calming effect on me.

At first, after giving up a promising career, I put all my trust in A Course in Miracles: Once you accept His [God’s] plan as the one function that you would fulfill, there will be nothing else the Holy Spirit will not arrange for you, without your effort. … Nothing you need will be denied you. Not one seeming difficulty but will melt away before you reach it. (T-20.IV.8:4-7)

Later, A Course of Love became my focus: I am safe, and nothing that I do or do not do will threaten my safety. (T3:13.8)

From any ‘normal’ perspective my life has gone horribly wrong. Starting off with a promising career in science, I now live in a hut on a farm with no apparent income other than a minuscule state pension. I have taken A Course of Love literally: You can put this new idea [there is no loss but only gain] into practice today and every day by simply refusing the temptation to believe in concepts such as earning and paying. (T3: 13.7) At this stage I neither earn nor pay for my living.

As I drop from the tree of worldly security and perceptions, against all norms and belief in the impossibility of safety in such a fall, I am more at peace than ever before. When I stand washing myself outside, I feel a bit like the game keeper in Lady Chatterley’s Lover, and I actually enjoy it! As far as I am aware I haven’t had a beautiful young lady spying on me yet, but you never know!

It did not always come easy, though. Far from it. Many a time I looked down and cried out: “What the hell have I done?!” Many a night I woke up, and at times still wake up, with intense fear. Then I ‘enter’ the fear, and it goes again.

The only way to learn trust, I have come to realize, is to trust.

As a child growing up in South Africa, Douwe sought refuge from loneliness in nature. To study biology seemed to him the natural thing to do, but after a master’s degree in zoology and a few years as scientist he resigned as oceanographic research coordinator to pursue his interest in the human psyche and its Source. In a remarkably varied career since then, he has acted as counselor, group process facilitator, mediator, overland and wilderness trail guide, high school teacher, permaculturist, writer, “playmate” at a preschool, and CEO of the Field (Nature) Guides Association of Southern Africa—all external forms of an internal quest for peace and Truth. Predominantly through A Course in Miracles, Eckhart Tolle’s writings, and A Course of Love. Douwe says, “I have now come to accept A Course of Love’s instruction that ‘the idea that you do not have to earn your way nor pay your way must be birthed and lived by.’ I cannot claim that it came without frequent deep and intense fear, but the result is ever increasing joy as I, as an ordinary person, move towards ‘living an extraordinary, and miraculous, and observable life’.”

The Self Within Me

After the jealousy so potent lost its pull,
and my accusatory stance was ousted
by an acceptance of life’s joy,
the flowers in my heart began to bloom.

After I stopped trying
to arrange the clouds
in patterns I preferred,
and I gave up my efforts
to orchestrate the winds,
I found the Self within me,
capable of letting every creature be.

The violent souls who dwell among us
are begging to be seen and heard.
The ones banging their fists
harshly on the table
need only their right to breathe
to be affirmed.

“Yes you have a soul
and it is filled with light divine.”

These words I say each time the one
intent on tearing down small comforts
comes my way.

A space for souls to see
the majesty of All
within each burning bush,
this space is created
every time I let God lift me up.

I live in peace;
my wholehearted Self is not disturbed.

Elliott Robertson lives in Philadelphia, Pennsylvania. His poems have appeared in Daily Word. Robertsont believes this poem can be addressed to the recent perpetrators of violence in Paris and other cities, as well as to the inner shadow.