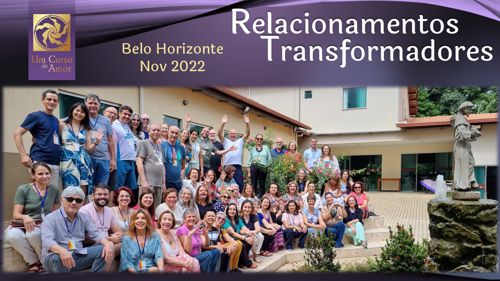 Celebrating our Oneness:
An Experience in a Conference in Brazil

By Rodrigo Cayres and Budhi N.

When we landed in Brazil in March, 2020, we would never have imagined that two years later we would be part of a team organizing their first national gathering of ACOL readers. After all, we were living in Mongolia, just visiting Brazil for one month. Second, ACOL had not yet been translated into Portuguese. Then the pandemic happened: our flights were canceled and borders closed. As we stayed here in Brazil, the translators finished their work, and we got involved in publishing Um Curso de Amor.

In quick succession after its publication in 2021, online groups formed and the number of group facilitators increased. Online events started being organized by the facilitators, including us. In February, 2022, the first in-person gathering of facilitators took place, with Glenn Hovemann present. Last month we celebrated the first-ever national gathering of ACOL/UCDA readers in Brazil.

On the first day of our four-day event, a young participant said her mother had registered for her, and told her she needed to get out of her little box. “Mother, I don’t want to go to this event. This is not for me!” But she went anyway. She told us she didn’t know what she was doing there. Yet on the last day, despite having little familiarity with ACOL, she was elated—transformed—and very grateful to her mother and to the nearly 60 participants who cocreated this remarkable experience. She won’t need her mother’s nudge to be in the next event!

This was a “conference” like no other. There were no teachers, no students, no speakers, no lectures, and no presentations. We sat in a circle, as equals. The purpose was to experience relationship in unity or oneness, where we see each other’s true Self—our shared identity that has no levels. Rather than gathering in a business-like hotel, we—the eight event organizers—chose a place with abundant nature in an event center run by nuns devoted to St. Francis of Assisi. The nuns who assisted us during the event were so touched by the group’s energy that they told us they had never seen a group so loving, appreciative, and integrated with each other as ours. One of them purchased a copy of ACOL/UCDA; another said she wants to attend next time. 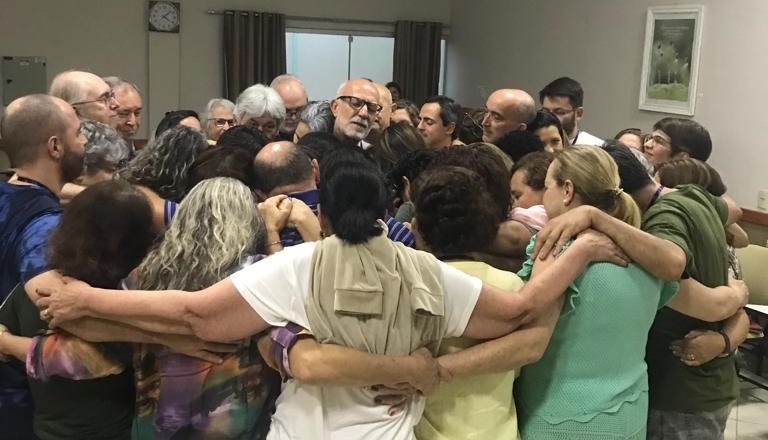 We have returned to the embrace. And now your arms cradle me as well, for an embrace, although it may begin with one reaching out to another, concludes with mutuality, shared touch, a melding of one into another. The embrace makes one of two. (C:20.7)

The theme was Transformative Relationships. We gathered quotes from ACOL and put them together in groups that span seven aspects of relationships: (1) with Physicality; (2) with Nature and Other Beings; (3) with Money; (4) with Spouse and Family; (5) between Mind and Heart, Masculine and Feminine, Human and Divine Self; (6) with Our Feelings; and (7) with God. Each aspect was introduced to the group by a pair of facilitators, who read a few quotes and shared personal insights and experiences. Participants joined the conversation naturally, exchanging feelings, questions, and understandings about the theme.

Right from the beginning, participants were called to see themselves as cocreators of the event, instead of just passive attendees. St. Francis of Assisi’s “for it is in giving that we receive” was understood by each one as a call to realize that they came to deliver something to the group. They felt empowered to take an active role in all activities and to express themselves. In particular, they sensed they could share and express all feelings—joy, doubt, fear, love, hope, trust, grief, excitement, etc. There was a palpable atmosphere of non-judgment, observance, and acceptance. 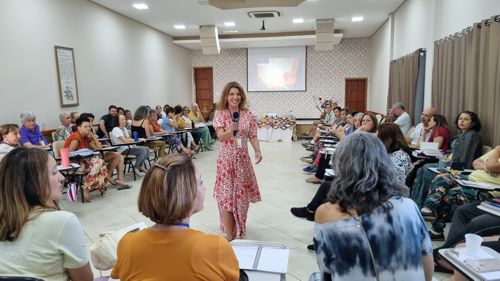 For example, a mother whose young daughter had taken her own life just a few months before the event was visibly sad on the first day. She held the microphone with shaky hands, and shyly spoke a few words before letting tears flow down her face. As the activities unfolded, she felt the power of the embrace to let herself be loved within the transformative field of consciousness that is formed when joining in union and relationship. On the last day, she spoke with joy and gratitude, moving around the hall and expressing herself with self-confidence, with certainty that nothing real can be threatened as she remembered her and her daughter’s innocence.

An inner alchemy takes place when we embrace and express ourselves just as we are, accepting all feelings and listening to their messages. All messages lead us back to recognizing our true Self, resting in the certainty that everything passes in this world except what is real—that we are light, love, life, freedom, power, abundance, and so on. When we experience joining with others in whom we see our own light reflected back to us, the transformative power of relationships becomes evident.

There were several moments for artistic expressions, including dancing, singing, teamwork, storytelling, poetic recitation, and walks for appreciating and being in dialogue with nature. As the purpose of the gathering was to hold a space for sharing in dialogue, to help participants loosen their inhibitions and express themselves freely, activities usually started with a few minutes of dancing to upbeat rhythms. Sensing there is no right or wrong in dancing, even the stiffest participants let themselves relax and experience their childlike innocence. In those moments, the appearances of the personal self—including age, gender, profession, socioeconomic level, etc. – dissolved as we became one body flowing within the same musical heartbeat. 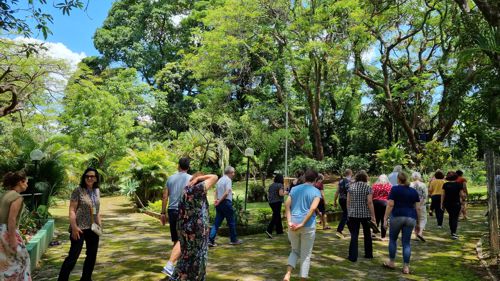 When feelings are shown, or made visible, the new is created. This has always been the way of creation. Each blade of grass, each flower, each stone, is a creation of feelings. (D:Day18.11)

To represent our human and divine nature, we gave each participant a name badge with their personal self’s first name followed by a word representing an idea from Self. Sixty words were selected from ACOL and printed on pieces of paper. When a participant arrived, they drew one folded paper from a bag to see what word would be added to their first name. This generated much excitement, started many conversations, and inspired all participants to reflect on and express their key idea. It was clear that divine guidance was at play when words were picked, given how remarkably accurate they represented some vital aspect of our lives at that moment. That young participant whose mother said she needed to get out of her little box picked the word “change.” The mother who questioned whether she was loving enough after her daughter’s suicide picked the word “love.” 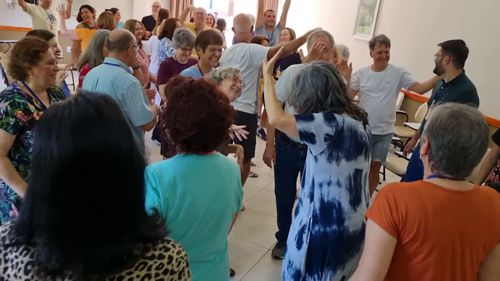 On the last day, all participants expressed their contentment with the event, acknowledging they underwent changes that would remain with them as they returned home. No one could really explain what had transpired during those four days. What was clear is that we each experienced some degree of transformation, discovery, awakening, realization, or opening of previously blocked wisdom that did not come through studying, learning, or anything the mind could grasp. We simply experienced the power of gathering in union and relationship. 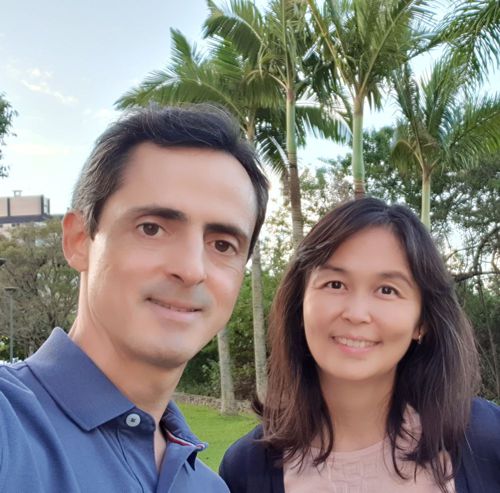 Rodrigo P. Cayres is originally from Brazil, and Budkhand “Budhi” Namjilsuren, from Mongolia. We feel we are global citizens and travel extensively, having been to over 35 countries and lived in Nepal, India, Mongolia, Thailand, Brazil, and Spain, where we made over 2,500 presentations on topics related to Self-knowledge, meditation, practicing compassion, non-dual awareness (oneness), and so on. In the past years we’ve been involved with Take Heart Publications, collaborating with Glenn Hovemann on a broad range of projects. We also organize activities with the ACOL community in Brazil and facilitate groups. Contact: rodrigo@acourseoflove.org