The visible and invisible 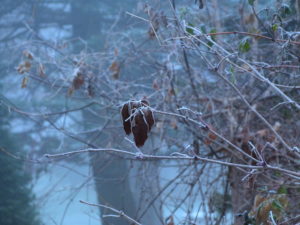 We are beginning now to paint you a new picture, a picture of things unseen before but visible to your heart if not your eyes. C5.7

Waking up to fog this morning gave me a splendid feeling of anticipation. It’s been warmer—mid 40’s, and the ground suddenly has give again. I didn’t know this heading for the cabin, but there was no way I was going to miss being out for the first vague and misty fog of the season, always so different when there’s snow on the ground, even the scant bit we’ve had.

In a mere week there’s been a significant decline in places for bunnies and squirrels to hide and find shelter. The steady fall of dry old limbs has left many passing friends in my path, and the few I pick up and pitch toward the fire pit are large but light, with no life left in them.

I walk into their topography of mystery, feeling surrounded by a burrowing and quivering 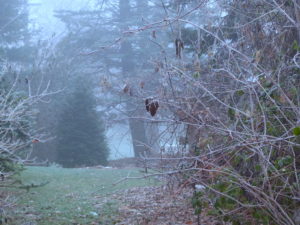 cloaked in dusk-tinted standing air—air given form. Ah, my God, the wonder of the visible becoming invisible and the invisible—visible! It arouses something in me, prickles my skin, upends my usual spacial sense of time and place. Something in me calms down and heats up at the same time. I’m both in my milieu and inspired by it.  All is fresh. I’m a voyager offered hospitality in a foreign realm. And so there is an alliance, a fusion.

All faith is faith in the unknown through knowing, as a glimpse of fleeting light in darkness provides for a knowing of light. D.Day18.5

Fog and mist are visual images of a partnership with mystery and its invitation to enter into it
. . . literally.

And so I begin to ponder the visible and invisible, a quiet and lovely theme laced through A Course of Love, drawing us into its exploration, and then into our likeness to the very thing we’re pondering.

This is truly the approaching magnetism of the great mystery, coming out to meet us in the wetlands, seeping quietly in. This is what you are. Not only akin to, but one with, the invisible realms. 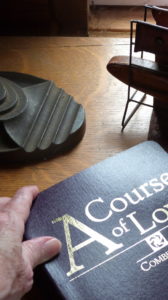 In addition to broad and lengthy descriptions of the spacious (and invisible) Self, this mystery is revealed in the metaphor of birth:

The truth represented by Jesus and Mary was represented as a visual pattern that would aide understanding of the invisible. This is what you are now called to do. Whether you demonstrate the myth of duality or the truth of union, you are demonstrating the same thing. The way in which you do this must be chosen, and for this choice to be made with full consciousness, you must rely on your feelings. D:Day18.7

Every day we’re asked to rely on our invisible feelings and make them visible. Whether it’s at a Thanksgiving table where family dynamics reveal the tenderness of someone who feels constantly interrupted, or the held-in fears triggered and revealed by an election, the revelation is essential to the coming of the new. It is the way deception becomes transparency.

This is the purpose of the world and of love most kind: to end your self-deception and return you to the light. C:6.22

The messages of mystery are many and varied. They can smooth and soothe or ignite and initiate. Yet the oneness stepped into causes a surge that reveals that we are that which we encounter.