The ways are not separate

Christ-consciousness is your will to know, to be, and to express. The time of Christ, and the second coming of Christ, are expressions meant to symbolize the completion of the cycle of birth, death, and rebirth as a means of coming to know. D:Day17.11

Yesterday was the 15th anniversary of A Course of Love’s completion—the day I finished The Dialogues.

I could never forget this date or that of the Course’s beginning (December 1, 1998). Because the course was completed exactly one year later, it’s ending (December 1, 1999) is memorable as well. The Treatises are another story. Unless (or until) I find my old journals I will not know the beginning date. I do know that there was a pause in between the Course and the Treatises, and that the first treatise, “A Treatise on the Art of Thought,” didn’t start until after the New Year, making the treatises a baby of the year 2000. I also remember that as the last of the treatises, “A Treatise on the New” was complete, “The Dialogues” began immediately.

Memory is such a funny thing. Elusive and vivid.

Yet Jesus speaks often of a larger memory and the return of true remembrance, saying memory 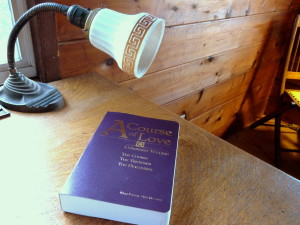 How comforting to know that this time moves fluidly into fulfillment of the way of Mary.

You have been preparing for this final stage of the fulfillment of the way of Jesus. You have also been preparing for the beginning of the fulfillment of the way of Mary. Many of you will follow the way of Jesus to completion, beginning a stage of interaction with the world, an interaction with the miracles that will aide in the dismantling of the old and with preparing the way for the birth of the new. Others of you will follow your hearts to a bypassing of the final stage of the old and to anchoring the new within the web of reality. Still others will participate in both, following their innate desire to facilitate the creation of change through a specific function even while moving into the new as they do so. Each way is as needed now as it was two thousand years ago. D:Day18.1

But the message is bigger than “ways” or “movements.” Like so much in this Course there is a both/and component, a unity of ways:

One way is active. One way is receptive. Yet the ways are not separate any more than Jesus was separate from Mary—or any mother separate from her child. The ways are rather complementary and symbiotic. Together they return wholeness and will bring about the completion of the time of Christ. D:Day18.2 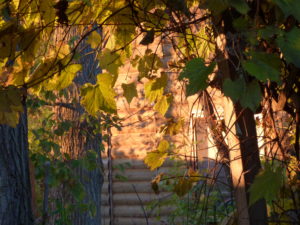 The ways are not separate.

On the day after ACOL was complete, my husband got the call that alerted us that the woods behind our yard were for sale as tax-forfeited property (or for a price we could afford).  I didn’t have a completed cabin for several years, but the “coming” of the new time still began that day, in 2001, as if an announcement was made: “A Course of Love is done. This is what’s next.” One life is over, another is beginning. And yet …  the lives, the times, and the ways are not separate.

This is meaningful to me as I continue my visits with Course of Love reader/receivers, even as I prepare for a quiet spring that returns me to the cabin and my contemplative life—with the realization that these lives are not/will not be . . . separate.  Each of us can embrace these complementary and symbiotic states . . . in our ways.

Contemplative time: March and beyond