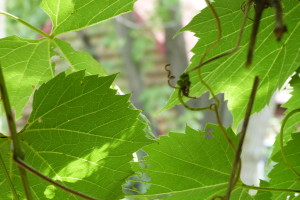 Active acceptance is what allows the great transformation from life as you have known it, to death of that old life, to rebirth of new life. By clinging to some of the old, you prevent its death and you prevent the rebirth of the new. You prevent the very life-giving resurrection you await. You prevent the elevation of the self of form. This does not have to be.  D:Day3.60-61.

August is more than the in between month on the calendar. In Minnesota, at least, it is the jungle-like time, the claustrophobic and close-feeling time of heavy air and equally heavy foliage all around. The trellis grapevine between house and cabin hangs low with 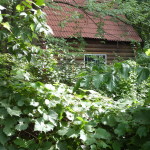 weight, the part of the grapevine that spreads along the fence does so in a middlin’ way, never quite achieving its former height. It is weighed down with itself.

Sometimes I feel that way too. That’s when there’s that need of a move from “acceptance” to “active acceptance.”

For two weeks it’s been hot and humid but the wind has kept it from being unbearable. Today, the wind is still, the movement has stopped. To walk out the door and not have any sort of coolness, to meet this heavy, wet, still and dark presence of a day beginning to come awake, may have started me on missing the wind and the movement of “active acceptance.” 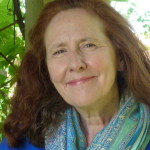 I have spent mornings in the cabin for ten years now. Once, about five years ago, I felt so accepting of new life that I gave my old life a burial. Somewhere, a few feet away from and beneath the ground near the cabin door, is a shallow tin that represented that burial, that feeling of death and renewal. I’m sure it’s in a journal somewhere, but without looking for it, I can’t recall what I put in the tin. I’m pretty sure there was a picture, probably one of me.

The times of active acceptance feel to be getting more and more lengthy, and to be leading to stranger and yet more ordinary realizations. The one I’ve been being with lately is the concept of “home.”

Home has been a place that is not about me alone. I have felt that home is meant to be a place of common concerns. That feeling has undergone a change. How many women or men starting out in life, or women who leave work earlier than their husbands or vice versa, feel this sense of a common concern having become a solo concern? While the family has been left behind, or while the other is off at work, leading his or her life, a life takes place “in the home” that is not particularly related to the other. It is an odd place to find yourself in. A solo concern. In a time in which unity is so desired, is there a conflict? What is the place for such a feeling on the path of unity?

Home is also about the “daily” living that occurs there—the home-based feeling of safety and structure that allows closeness with the small and seemingly inconsequential, whether it’s the putting out of birdseed or the making of a loaf of bread or a bed. There is a familiarity and a regularity that . . . allows an everyday newness that invites the creative spirit to soar.

I’m glad the word “solo” came to me to describe it, because it feels so different than “separate.” It brings up an image of each having their own song to sing. It is in home “coming” that I am able to embrace the solo, the solitary, the inner life and the intersection of the inner life with the outer. 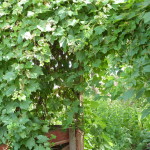 my most treasured realizations with this Course is that we are here to be creators. This realization calls me to have a different sort of relationship to “home” now . . . a relationship that can leave behind “a” home’s structure to venture off into an unknown that holds a new sort of creative potential. From home base, especially an inner home base, active acceptance can cast one free of anchors and bring new vision.

With active acceptance, the time of learning ends, the time of reaction ends, a new response, and creation of the new, can begin.

You look outside the doors of your home and, whether you see suburban streets bathed in lamplight, streets that steam with garbage and crime, or cornfields growing, you say that is the real world. It is the world you go out into in order to earn your living, receive your education, find your mate. But the home in which you stand, much like your inner world, is where you live the life that makes the most sense. It is where your values are formed, your decisions are made, your safety found. This comparison is not idly drawn. Your home is within and it is real, as real as the home you have made within the world seems to be. You can say the real world is somewhere outside yourself, as you picture the real world being beyond your doors, but saying this cannot make it so. C:5.16