Arise, all who have hearts!

I spent a somewhat unusual Mother’s Day (having celebrated with my mom yesterday), enjoying a simple brunch at the home of my youngest daughter and her husband. All my kids and grandkids were there and we talked inside a house still cool, and then went out back while the kids that could, jumped on a trampoline nestled beneath shade trees. Going out to our cars later, we were hit by the first mid-80-degree day full force. 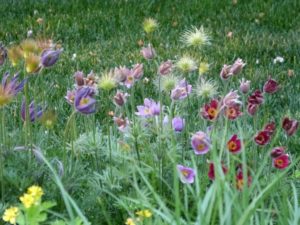 No, spring is not over and I’m still enraptured by first flowers and sunlight laying shadows over freshly cut grass, and the sweet and pungent smell of its leavings. But today, as I remembered Mother’s Days of my past, days when family gathered to plant my mother-in-law’s garden, and my fill my mom’s flower boxes with pansies, I got to wondering about the more distant past and the origin of the day. I found several references to a declaration made by Julia Ward Howe that I’d never heard of before.

Julia Ward Howe – an abolitionist best remembered as the poet who wrote “Battle Hymn of the Republic” – initially worked to establish a Mother’s Peace Day, dedicating it to the eradication of war. This is her call to action, sounded after the Civil War (in 1870). I have taken much of the below from this site: http://www.plough.com:

“Arise, all women who have hearts, whether your baptism be that of water or of tears! Say firmly: “We will not have great questions decided by irrelevant agencies, our husbands shall not come to us, reeking with carnage, for caresses and applause.

“Our sons shall not be taken from us to unlearn all that we have been able to teach them of charity, mercy and patience. We women of one country will be too tender of those of another country to allow our sons to be trained to injure theirs.

“From the bosom of the devastated earth a voice goes up with our own. It says, “Disarm, disarm! The sword is not the balance of justice.” Blood does not wipe out dishonor nor violence indicate possession.

“As men have often forsaken the plow and the anvil at the summons of war, let women now leave all that may be left of home for a great and earnest day of counsel. Let them meet first, as women, to bewail and commemorate the dead. Let them then solemnly take counsel with each other as to the means whereby the great human family can live in peace, each learning after his own time, the sacred impress, not of Caesar, but of God.”

I so appreciate finding this and the expression of commemorating the dead before taking counsel with one another to find the means of living in peace. Such counsel is surely as needed now as then.

Yet, even the simplest celebration of Mother’s Day can have some sense of the under-recognized demonstration of the way of women. We have some experience with birthing the new. The new we’re called to birth now isn’t exclusive to women, but neither will it happen without us, without the way of Mary, or without, as Jesus says, the coming together of the ways of Mary and Jesus “like intertwined circles.”

The way of Mary represents incarnation through relationship, demonstrating the truth of union, the birth of form, and the ascension of the body, (see below) But we also hear:

“All are capable of birthing the Self.”

This, to me, is the reminder of spring—the continual birth of the new—the unendingness of this rebirth. The way life changes us so that we’re never exactly who we were yesterday. Our call is to appreciate this birthing and to extend it into the creation of a new future.

Jesus asks a question of us about this birth of Self. He asks, “What then of the necessary act of giving and receiving?”

And he answers, “You have long waited to receive what you have thought could come only from some other.” T1:9.8

This has certainly been true for me. I didn’t always realize it, but I have now.

And so, Julia Ward Howe’s “day of counsel,” impresses me as being much like our call to dialogue. It is part of a long line of “counsel” that we’re given in A Course of Love, the conclusion of which is to come together in dialogue. This is not a “waiting on some other” but a “joining.”

What continues of this Course is its dialogue. A.46

In delineating the ways of Jesus and of Mary, we aren’t hearing of a division, but of needed differences.

The way of Jesus represented full-scale interaction with the world, demonstrating the myth of duality, the death of form, the resurrection of spirit. The way of Mary represented incarnation through relationship, demonstrating the truth of union, the birth of form, and the ascension of the body. Both ways were necessary. Both ways were necessarily represented or demonstrated. Both ways were represented and demonstrated by many other individuals as well. The way was a choice. The main ability of the individual is the ability to represent what God created, the means of coming to know—which is Christ-consciousness—through individual choice or will. Christ-consciousness is your will to know, to be, and to express. The time of Christ, and the second coming of Christ, are expressions meant to symbolize the completion of the cycle of birth, death, and rebirth as a means of coming to know. D:Day17.10-11

Division and “sides” (as we see so easily in politics and not often as easily in our own lives) disallow dialogue. To come together, even with all of our differences, is crucial, and beautiful. It’s a form of wholeness and completion. It’s the way of peace and of new life.