I don’t get the impression that Jesus is going to suddenly appear in the clouds and take over the world and thus solve all our problems. Jesus is depending on us to work out the details as we create the new world. The people beyond ego with truly open hearts are like yeast, we have now to saturate the world and convert it with nothing but our love. Dr. Monte Page (from an article entitled, ACIM, ACOL and the Second Coming.)

A few weeks ago I sent an email to Joyce Page, wife of Monte Page, a retired professor who wrote the first ever review of ACOL as an ACIM sequel. He had Parkinson’s disease and no longer used email or could read much, so I wanted him to know he could listen to the audio of A Course of Love. Joyce replied, telling me that he had died earlier this year, and that she’d thought to tell me but then it skipped her mind. Yesterday, I received a promised copy of his obituary and a second article he’d prepared but not published.

I sat with it yesterday, reminiscing about how I “knew” Monte, a relationship carried on solely through writing, dating back about ten years. I remember that he sent me the story of his life, a huge thing like a ream of typing paper bound with a spiral. I wonder what I did with it and if I’ll find it as I sort out the corners of my life. I can remember very little of it. A young man…doing a young man’s seeking. That’s what I remember. And that it touched me.

As I fold these items back into their envelope, I feel the yen to write to Ross, a New Zealander living in Vietnam with whom I’ve shared writing in a much more intense way for about six or seven years. Both he and Monte contacted me because of A Course of Love. Over the years there have been many contacts, but only a few women and men who’ve been as close—and with each it’s at least partially because we share a love of writing.

I get on my laptop and tell Ross about Monte and how amazing I find it that his wife thought of me at all. I never met either of them. Seeing his picture with his obituary, Monte looks nothing like I imagined. I would have guessed him to be bald and tidy, straight as a fence post, dignified and scholarly. But he has a shock of white hair, full beard, gleaming forehead, pear-shaped face and square teeth visible in a very friendly smile. I recall that one of his students, fond of him but out of touch, wrote me to ask how to reach him. My reflection on Monte fills me with appreciation, which is why I suddenly must write Ross before my day gets going. I need to share how the feeling of appreciation extends to him—before anything else gets in the way.

Later, coming home from church and dinner with my mom, I pull the car into the garage, walk down the driveway, and pick up the mail. There is a letter from the man I always refer to as “my poet friend Elliott….”  I am so happy to get it. With him, too, years and years of writing, many letters in many envelopes. Many poems. A box of our correspondence in a desk drawer in the cabin; treasures. Not just the letters in the box, but the companionship. I find my notepad, still filled with notes from New York and lists checked off. I turn to a blank page and, pen in hand, go sit outside in the cool of the evening to read and to write.

That was yesterday. I arrive in the cabin this morning with the intent to share from Monte’s article. There is another blazing sun on the rise. I plug in the percolator and sit with my back in the corner, facing away from the sun, finding myself pulled, instead, into an exploration of companionship. It’s what I have in these friends, what I desire to offer, what I feel when I read ACOL and other favorite books—journals particularly. I know what I mean by companion, but can I describe it? What is it?

I turn from my table and reach back to the top drawer of my desk, drawing out my dictionary.

companio, literally bread fellow—he who eats of the same bread, com-with, plus bread. companion: a person who accompanies another

Next I look up accompany

What, I wonder, does my Course say about being a companion? I do a search in A Course of Love.

You travel lightly now where before you walked in chains. You travel now with a companion who knows you as you are and would show your Self to you. C9.9

I sit. Stunned. This is what Jesus has been to me. How could I have forgotten that he refers to himself in this way, or what he says. This is it: a companion knows you as you are and shows yourself to you. And yes, how perfect. A companion snaps your chains and lightens your load.

How do companions do this incredible thing they do?

I have “The Intimate Merton” nearby. I pick it up. My eyes drift over a page written in June, 1966: 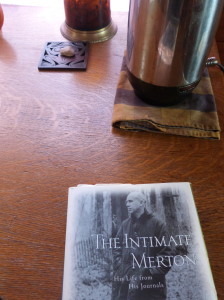 The old life is habit that no longer exits…

I sit on the porch and deliberately refuse to rationalize anything…

Solitude as act: the reason no one really understands solitude…

In his journals Merton is like me, a human being living his life; being, sensing, feeling, thoughtful. As he shares himself with me, he shares myself with me. He accompanies me. In knowing him, I know myself. I share in the common “condition” of humanity and its quest to surpass itself, and I observe the ordinary becoming extraordinary.

Monte, like myself and many others, found companionship of this sort with Jesus through A Course of Love. Jesus, in being the ultimate companion is like a “person” who you can relate to and hang out with and discover truth with, someone who talks and listens too, and who put it all in a book that you can’t forget and can’t remember, so that each time it can be like a letter from a friend, a surprise, a visit, a dialogue.

Christ is the goal of human evolution. We are at the dawn of something really new; a shift in the level of our collective consciousness that will transform the world.

Moving out of the time of the Holy Spirit to the Time of Christ, is about this human evolution. As we leave the time of teaching and learning, we discover many new gifts. I feel that the one that is going to continue to surprise me the most, and be one of the most pleasing, is this gift of companionship and the many ways in which it comes. Companions make me feel so damn lucky!