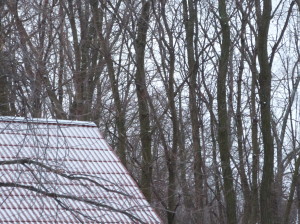 Lay aside your want of other answers, other stories, and accept the story we share. The Bible and all holy texts can be seen clearly now as one creation story. One story of one beginning. One story with many promises made. D:Day1.28

Here in the cabin, the sky is beginning to turn from black to blue. There is a brilliant crescent moon with an absolutely stunning star next door, a few other stars lying about, allowing themselves to be seen and who knows, maybe relishing in the adoration of those who view them. Viewing the moon and star begin my movement, slow but true, to embracing this time of year and the messages within it of the coming of a new time. These are messages (both secular and religious) of awaiting and preparing and anticipation that, with a little reflective time—allow a sacred perspective of the season and its promise of prophecies coming true; of new life coming to be.

Yet what I’ve been actually pondering is the birthing story. Saying it this way, it is still the same story, but a little more to do with Mary. It gives it a tad more to do with each of us being the vehicles of new life. It’s a movement beyond the Adam and Eve story to the Mary and Jesus story. The Adam and Eve story was the story of movement into form. In Day 1 of the Dialogues, Jesus says “I represent your birth into what is beyond form.” And in Day 17, we hear of the way of Mary, being one of “incarnation through relationship.” But I didn’t really mean to get into all of that only to say that I’m feeling the truth of us sharing one story, particularly in the area of us each having our part in birthing the new.

Mary’s birthing story begins with an announcement from the Angel Gabriel, “Rejoice, the Lord is with you. . . . You shall conceive and bear a son.” (Luke1:28) These were the words she carried in her heart and lived in the awesome and surely difficult time between when they arrived and when she birthed new life. Announcements were going on all around her. In many ways the announcements were the story. . . “A voice cries in the wilderness: Prepare a way for the Lord.” (Luke 3.4)  And so . . . those who could hear did so. They prepared, and the wise men traveled, and all yearned for something to come, something the nature of which they knew not.

To Mary God gave his only-begotten Son, whom he loved as himself. Through Mary God made himself a Son, not different but the same, by nature Son of God and Son of Mary. The whole universe was created by God, and God was born of Mary. God created all things, and Mary gave birth to God. The God who made all things gave himself form through Mary, and thus he made his own creation. He who could create all things from nothing would not remake his ruined creation without Mary.

St. Anselm’s vision gives the Mother her due. In Creation of the New, a book I wrote ten years ago in a mystical state of consciousness, “the secret of 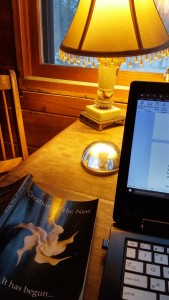 motherhood” and the “secret of the new” are joined. Symbolically and possibly essentially, saying that the Christmas story is a story not only for, but also about, all of us.

“[T]he babe born into the world from the other realm and given back to it through its life, is the secret way of coming to understand what cannot be understood, the burden and the gift of life and its distinction in unity and relationship. Each one is that babe, living in distinction to give back the sacred to the sacred, to pour itself out of the urn of life into the pool of the divine. The divine empties itself into the natural world and the natural world empties itself into the divine. (CON 29)

“Where there is heart there is still a trickle longing to become a stream, a flood, a pouring forth. Like not unto beasts of labor, yoked and shackled, is the human heart, but like is she unto the babe, a hidden messenger of the divine. Each heart carries coded divinity that, like an open channel, sends out its distinction in its pulse, an answer to the One who awaits her response. Holy to Holy.” (CON 31)

As we view the many wonders of the natural and physical world during this season, I pray that we each remember that we, too, are not only the created but creators. Creators of the new. And it is us who are now called to birth new life. It is us. It is now.

*Creation of the New (CON)