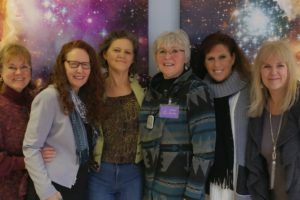 I’m second from the left, Mary Love is on the far right

This Course requires no thought and no effort. There is no prolonged study and the few specific exercises are not required. This Course has succeeded in ways you do not yet understand and have no need to understand. These words have entered your heart and sealed the rift between your mind and heart. (C:32.4) 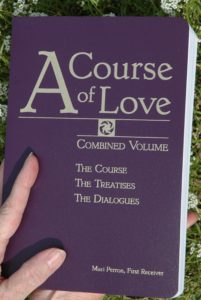 It’s six o’clock on a Sunday night and I wonder where the word “o’clock” came from. Such are the things that run through my mind after a long day.

This was an unusual Sunday.

On most Sundays, I wander out to the cabin for an hour or two and often come in from it with inspiration for a blog. For a year or more I wrote these blogs each Sunday without fail, the only exceptions being when I was on the road. When I’d get done with the blog I’d post it to Facebook and visit and respond to the ACOL Facebook group. But I haven’t been regular with this since the new year began and I didn’t even alert anyone that I was not going to be being regular. Highly unusual.

Today was unusual because I visited with the community at Unity of the Valley in Savage, Minnesota, about a half hour from my home. It’s the first time I’ve delivered a message during a Unity service here in my home state or been invited to stay for conversation. My friend and colleague Mary Love went with me, arriving at my house at 8:45 to find me raring to go and my car warming up in the driveway.

When we got back it was nearly 3:00 and, although the church supplied a potluck, neither of us had eaten and so had stopped on the way home for coffee and cookies to tide us over. “I can’t have coffee now,” I’d told her in the morning, “I might spill.”  She told me of a trick she’d learned at the U of M where we once worked together. A speaker had spilled all over the front of her shirt, she said, and they just turned it around. I didn’t mention that I was in a dress.

On our return, Mary came in to take a look at the package I’d received the night before, equipment necessary for my BatGap interview this coming Saturday. She’s been helping me get ready for the technical side of things before a fellow named Jerry will Skype with me to check out how everything is working. The long Ethernet cable was perfect, but the external apparatus that would connect it to my computer wasn’t right. “I’ll go to Best Buy now,” I said. “Once I sit back down I won’t get up again.” She said felt the same but would go with me anyway and we trundled off.

Both of us still looked pretty good. I for sure looked better than on my average trip to Best Buy where I might change out of my sweats into jeans, but might not. It garnered me better service than I’ve ever gotten and Mary and I were both in a great mood with getting in and out of there in ten minutes. After checking that this new piece of equipment would fit the task, she took off, and I got out of my dress. As I did I realized a trip to the dry cleaners would be good (even though I hadn’t spilled), and folded the clothes into a pile to sit on the table at the foot of my bed. There was already a shirt there, folded for a Good Will stack I had going in the basement. Since I was going to the basement, I collected hangers, left them on the clothesline there, and on my way back up brought up the hangers hung with clean clothes.

Mary and I have always agreed that creative times are messy. After having a sandwich and taking a bit of a rest, I began to wander through the house, picking up the water glasses of two days and emptying them into the plants I usually water on Monday. Then I disposed of the paper cups we’d brought in from the car, and set the boxes we unpacked by the door for recycling. I hung up my coat, unpacked the bag with my copy of ACOL and other whatnot items, filled in the blank I’d written on my Unity of the Valley file with the mileage, then filing the receipt from Best Buy, realized I needed a new 2017 file and started that.

I include these “wandering around the house details” because this is what I do when in a fog. I move from one thing to another, with what my eyes fall on becoming the thing of the moment.

Order restored (somewhat), I checked my e-mail, and found that Terrie, one of the women from Unity, had sent me the photos she’d taken. Only then did the day start to come back, to push through the fog that such events always seem to immediately become, as if the joy of them is too much to take.

This was a beautiful church, an inspiring service, and the folks who joined me afterwards for a Q & A were ordinary and beautiful and thoughtful and full of good questions and hopes for more such visits. As we wrapped up and people came to have me sign their books, Mary held court with a small group of women in a corner of the room, their voices and laughter rippling while I had quiet conversations with those whose books I signed. 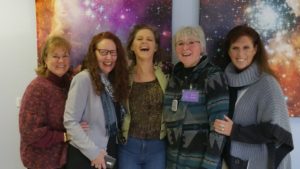 On the way out we started taking pictures. There were only women left by then and we were acting like old friends, talking and goofing around, full of that “connecting” joy.

As we got in the car, Mary said, “Wait a minute,” and ran through the parking lot toward where the women who’d walked out with us were getting into their cars, took off her beret, and threw it into the air like our fake Twin Cities sister, Mary Tyler Moore.

And then she caught it.

I said, “I wish I’d gotten a picture of that.” I wish I’d gotten a picture of that because it would have said it all. There was a freeing feeling about the joy of connection that matched the freeing feeling of allowing myself the greater ease that I’ve had since the new year began. Mary being with me today helped me sustain that feeling of ease. I told those assembled that in the conversations she and I share, with one thing leading to another and another, there’s something that happens. Mary elaborated, saying it’s always a matter of creating a shared “something,” that becomes more than what it starts out to be through relationship.

I’m paraphrasing terribly because the fog is still messing with my recollection of the day. But not the feeling of it. Connecting is a thing of joy.

“With this Combined Volume, A Course of Love ends its relative obscurity. . . . Its time has come because so many yearn for connectivity of the heart and are bursting with passion to be who they really are.” Glenn Hovemann (from the Foreword)

The YouTube Channel for Saturday’s Buddha at the Gas Pump (BatGap) interview is
https://www.youtube.com/user/BuddhaAtTheGasPump/