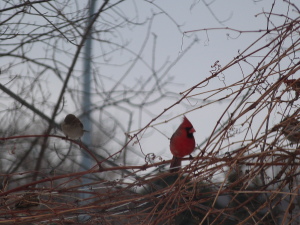 All the symbols of your physical life reflect a deeper meaning that, while hidden to you, you still know exists. C1.17

These days, I do not spend as much time in the cabin as I once did. I go to the cabin each morning but often I don’t get back here. Sundays are different. This Sunday, I am back for a second time. The first was in the damp dark. Now it is light, foggy, and raining softly. I adore fog. Rain after snow is most always welcome. Smells of spring fill the air. You hope it all washes into the ground before the next freeze so you don’t end up with a skating rink, but even that threat can fade from your mind as mist fills the air and raindrops ting against your roof. Especially if you adore fog. If you love the ways of obscurity—seeing through to what is there, as with fog—or seeing what comes as darkness lifts and light arises. Such acts of nature feel to me…private, under wraps, in between, deeply…soulful! Although I often complain (it seems a requirement of those who live with winter weather), I love seasonal change and its symbolism.

A Course of Love began at the start of Advent, the time of the coming of Christ; at the end of ordinary time. It was symbolic to me, that this should happen. Significant. A message. Last night at church, in hearing the reading for the last Sunday in ordinary time, (MT 25:31-46) I was reminded, as I am each year, of those days of awaiting and then beginning to receive ACOL. As I thought of it, this year, I felt it would give me a helpful way to bring one of those neither here nor there, right or wrong, foggy areas, into expression. Because the thing is, I would not have understood symbolism from other cultures or religions. I needed those specific to my life experiences. The reading reminded me that Jesus too had a culture, and lived and spoke from and to that culture  (in this passage from Matthew he is a shepherd, separating the sheep from the goats!).

I bring this up for a number of reasons.

In A Course of Love we are called children of God. God is referred to as a He. That is one of my reasons. Do I believe that God is a he? No. Did a male God fit my understanding of God at the time I received this Course? Yes. Did a parental God fit my image of God at the time? Yes. But even then, I feel, it was as “image,” a way to understand and to relate. By the time we have reached the end of A Course of Love, this language is explained. There is a reason for it. We can keep or shed such language.  But the mood is different. The context has changed. Our view has broadened. We can accept so much more about who God is and who we are.

There are reasons for the idea of a god who has offspring; of an idea that fosters the sense of a benevolent god who is as unconditionally loving as a parent for a child. It is a way to conceive of such things before we understand God as a state of being and Love as the nature of that state of being. Before we see ourselves as an extension of this Love. And it is clear that the way we see God, in whatever way that is, is just fine. No one has to abandon their relationship to God—not as Father, as Mother, as Spirit, or as Creator.

But here’s the real foggy part that is on my mind this morning:

Early in the Course, the words, “man and woman joined in marriage” followed the ones at the top of this page: All the symbols of your physical life reflect a deeper meaning that, while hidden to you, you still know exists. The union of two bodies joined in love create a child, the union of man and woman joined in marriage create oneness. In 1998, those words didn’t phase me. By 2006, when I did an updated printing, I wanted to change them, just take out “man and woman” and put in “two people.” It felt like the right thing to do and the wrong thing to do, both at the same time. Did I have a right to mess with the words as they were given? Even knowing that Jesus spoke to me of marriage as I understood it at the time? Or that the way he speaks to us changes as we go? In the Treatises, Jesus specifically extends welcome and acceptance to all people of every creed and sexual persuasion. But I don’t know if that takes the sting from “man and woman joined in marriage.” So, I want to say that as the first receiver, for whatever it is worth, I did not hear these words as ones meant in support of only male and female unions. I heard them merely as a reflection on one symbol of joining common to the time in which I heard it. To support any exclusion to joining would make no sense, as we see as we continue, and I want to be on record in this regard.

From our various beginnings, we travel on many roads to broader horizons where understandings and differences begin to fade and I can only say that the love spoken of here both transcends and includes all images.

[T]his call to return to your Self is being sounded far and wide and … goes out to humble and ordinary people like yourself. There is no exclusivity to this call. It excludes no race nor religion nor ones of either sex or sexual preference. It but calls all to love and to live in the abundance of the truth. T3:21.21