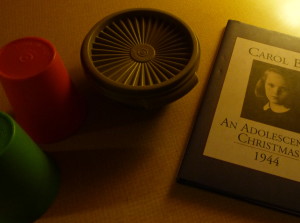 What has happened here is that words have been put on the feelings and remembrances that you have within your minds and hearts and have been sharing in this dialogue.

It started a week ago with a book review headline: “Lethem’s ‘Lucky Alan’ collection has heart, brains”. The reviewer quotes Lethem saying, “We’re these dreamy fools, drunk on narrative, who see the world around us in metaphorical terms.” The reviewer then says this is “True to his [Lethem’s] long-standing, genre-bending focus on how we tell our stories and what that says about who we are, as we struggle to find readers willing to share our solitude.” The last words were the clinker: readers willing to share our solitude.

Then yesterday, before church, Mom and I went to Mendota, to VFW Post 6690, my dad’s old Post and life-long good-neighbor, where its growth in size has not changed it at all, as I see Dad’s stomping grounds only when I poke my head in the door (as I did as a child) getting a view of the long, dark bar, the surface of it gleaming under the neon of Grain Belt, the smidgen of sun, the whiff of beer. We are there for the VFW’s annual Lenten garage sale, run on weekends to coincide with Friday night fish fries.

We work our way through tables of dishes and trinkets:  a white pitcher with black edged images—a chicken on one side, a cow on another. Thirty dollars for an RCA phonograph on which to play your 45s, Tupperware for a quarter. I’m about to make my way out with my fifty cents worth of Tupperware; am just wandering past the jewelry, when a book catches my eye, a thin hard cover with an adolescent girl’s photograph on the cover. It is my old writing teacher Carol Bly who has haunted me more than a few times over the years. I can’t fail, despite the youthful photo, to notice that it is her, as her name is emblazoned over the picture in firm capital letters. I turn it over. It is the fourth in a series of holiday books from the Afton Historical Society Press, the first having been written by Jon Hassler. I buy it for five dollars (which tells me someone there knows a quality book) and chat with Willard, who is a cousin to my dad, as I dig my bill and change from my purse.

Then Mom and I go to church. Returning from dropping Mom off, having eaten in the church basement: a fundraising taco dinner, I bemoan having eaten all three of the tacos that came on my ten dollar plate. (Mom brought two of hers home in a to-go container.) Once in the kitchen I run the dish water and wash my green Tupperware lidded bowl, and my one red and one green child-sized cups, along with the remnants of a breakfast too small to run the water for, and then pick up Carol Bly’s book, just after drying my hands, and read it right there next to the sink. The opening:

A lifelong task of authors is to notice and engrave the ten or twelve percent dissenting opinion about anything that counts. If Tolstoy was simply wonderful, and he was, he must still have been ten to twelve percent mistaken about something—in this case about happiness in families. Authors’ work is to honor some insights so peculiar that we are not sure it is all right even to harbor such thoughts.”

Is it possible that I have participated in revealing a long dissenting opinion, i.e., a new truth about the nature of humanity and reality itself?

With literature, I can tell in a few sentences that I am in the presence of a master. Each quickly reveals herself and cause me to want to do the same. It has nothing or little to do with having something specific to say but only with the yen to reveal. If I meander around in my own sentences long enough, this sometimes happens. And then I may be done again for a while.

I am no longer a “constant” writer, but I am still a writer.

You could almost say that I got pulled into the spiritual life kicking and screaming. As my “spiritual” revelations began, I worried incessantly over the fate of a mystery novel I’d written. As A Course of Love began I still, for a while, worried just as incessantly over the fate The Grace Trilogy, spiritual books that had recently been published. As I entered this new round of re-publishing of A Course of Love, I was in the grips of having written a manuscript I wanted to publish regarding my discovery of feminism. Spirituality seems to, despite my resistance, keep trying to supplant my first my love . . . writing. And to, in some ways, keep me yearning for the “truth” of the odd revelations of written word.

And so I eventually come to a remembrance of a peculiar item stated within A Course of Love: 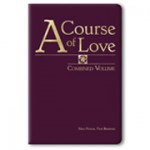 I am reminded of this cycle of receiving and responding, as happened to me this week with Jonathan Lethem and Carol Bly as well as A Course of Love. I am reminded of what elicits a response and how response and expression go together. Then I wonder to what end I am being so reminded.

Perhaps I am being summoned by the responses to A Course of Love being revealed in ACOL’s new Facebook group. Each one so unique. Each expression so vital. https://www.facebook.com/groups/mariperron/

Reminded that it is all predicated on having first “received” what is given. What is “received” seems to come with a spark, a spark like that from the masters of literature that cause an aching sort of response. A need to respond. A desire to hear the responses of others. A “we’re in this thing called discovery, called coming to know, called revelation . . . together.

Here to reveal a new Self and a new reality.