Let your self be your given self 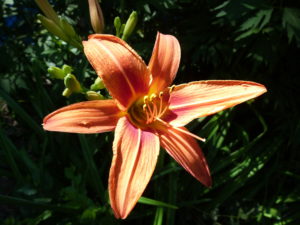 “What we casually refer to as “normal” behavior is really a state of arrested development.” Gregg Levoy, Vital Signs

For at least a month, Saturdays have been the hottest day of the week. It as if the heat builds and builds, flames out on Saturday, and starts from scratch again on Sunday. If you’ve noticed less reporting on the goings on at Mass lately, it is for this reason. Mom is too frail to be out in the heat, and so instead of going to church, I bring her dinner. (She watches Mass on TV in the morning. I admit that I do not.)

In this morning’s coolness, there are little gnatty things gnatting about. I have heard that the relative lack of mosquitos this year has been due to the early heat being followed by great cool-downs. It seems now, the natural course of the days of this season: coolness and heat.

Surrounded by extremes of change day after day and year after year, change still remains a bugaboo of our own natures. It’s as if we yearn for the unchangeable and yet when we find it in routines it begins to call us to a new cycle of change.

My focus this season, has been on the nature of the “New” that constitutes A Course of Love.

Four or five blogs back I mentioned the call to “Be a big girl now” as the start of my retreat from myself. I was lucky. I was eight at the time. My little brother had just been born. I suppose you could say that being the baby of the family for eight years, I’d been babied a lot longer than most. A “big girl” was something I did not know the mechanics of, and my mom was too busy with my little brother to help. That was, for me, when the expected “normal behavior” began to arrest my development in a big way. All of which I mention because once again, as I contemplate the New of ACOL’s message, I am barely able to divert my focus from the end of learning.

Our whole lives, from at least age eight on, have in many ways been about learning, and learning has been, in as many ways, about turning off what is natural and turning on that which will help us to fit in and to succeed at life as it is in the “real world.” As we age, this drive becomes one of achievement, with constant goals to be reached. I am certain that applying this way to our spiritual lives is actually the greatest detriment to it, and a greater challenge to us than joining mind and heart.

How do we let what we do arise without what you might call “the need” to do it in the old way, for the old reasons?

Jesus is so brilliant in giving us exercises that can help us—but not “requiring” them. He does all he can to keep us from approaching this in the old way by which we so easily can miss the New way that will actually release us from our restrictions and leave us free to be who we are at last. So I invite you to notice the drive to achieve within yourself, and to let it go! 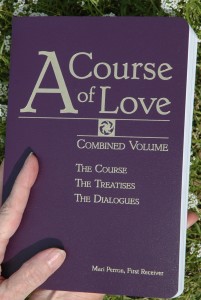 I invite you to remember that willingly is not the same as willfully. In striving to learn or achieve, there is an “on our way to something” attitude that is easy to live with. It’s where we’ve been all our lives: “On our way” to the time when we can live the lives we dream of.  On our way to being who we are. Doing all we can to “get there.” Our drive to “get there” stands in our way of being there, and stands in our way, too often, of sharing the self we are now.

The self that you and I can be most timid about sharing is the natural one that our sisters and brothers and the world itself are waiting for—our “given” self. (Jesus speaks of the “givens” in The Dialogues, from Chapter 10 through Day 9, a compendium that you can easily access by typing +given into the ACOL search facility found here: http://www.centerforacourseoflove.org/search-phase/)

I’ve just discovered that The Given Self, a book I wrote in 2009, has gone out of print. Oh, how much more it means to me now! Isn’t that the oddest thing! I’ve barely spoken of it in the years since the book was released, but now that it is no longer available I feel it, I miss it, and I want to bring it back! I was so passionate in writing it! The passion I have now does not have that same texture, but it was a fine passion and I’m looking forward to making The Given Self available once again.

At the time, I was searching for a way to describe being who we are together (and the need of it). Here’s a snippet: 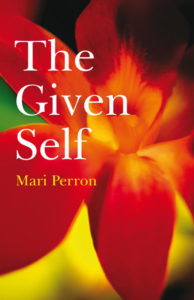 “[T]here are many, many, more centered among us than are being seen, many more meetings that could be taking place. We look into each other’s eyes and see the hint, catch the glimpse, turn the first page . . . but can’t get beyond it. “

You might feel that such light can’t be hidden, and yet, don’t you fear that it’s hidden in you? Aren’t you almost literally dying to have your small flame become a glowing fire? To have it be seen? It’s not as if this is something you can do, like taking off your clothes and running naked, but this welcoming of the given self is akin to ceasing to hide your light beneath a bushel basket. Allowing people “in” and letting your flame “out” can be the same action.”

2 Kelly, Thomas. A Testament of Devotion