Our liberation story may seem specific to our historical experience, but its message–that we are not stuck, that the world can be totally transformed, healed, repaired, and that the forces of oppression which seem so overwhelming at the moment can be overcome–is universal and as needed in April 2015 as it was in April 1250 B.C.E.

It was Wednesday. My grandson Henry had a playdate with Fernando, a boy from his class at school. Henry switched schools this year and I’ve been trying to facilitate friendships with his classmates since September. His two best friends at school are Mexican boys. Fernando speaks English as a second language. I had sent several notes with Henry asking if Fernando could come play, but had gotten no response.  Finally I managed to get a phone number and the date was arranged for this mid-week day of their spring break. Then it was canceled. Because it was canceled, Henry stayed on at his mom’s.

Suddenly, there was nothing I wanted to do. I had much to do, but there wasn’t one thing that held any appeal at all. I wandered around the house telling myself “You could do this, you could do that,” ticking off the possible items for attention one after another. After some time, I concluded that I would go out and get something to fill the Easter baskets of my grandsons. I did not feel like doing it, but I didn’t feel like doing anything else either, and I was too restless to … rest.

So I stood in the aisle at Walgreen’s. I stood there so long that a clerk came up and asked if she 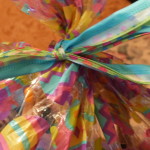 could help me find something. I said, “No, I’m just not in the mood to do this today.” She walked away.  A little later another clerk came and asked me the same question. I told him the same thing. I thought of leaving, but then I told myself, “If you do, you’ll just have to come back.” So eventually I began to pick items off the shelf, thinking as I did, that last year, I was on top of my game. Yep, last year, I was. Henry and I were re-reading an Easter book. “Owen and His Marshmallow Chick.” The book spoke of everything Owen got in his basket, and that’s what I went out to buy. One of Owen’s items was gumdrops. Another was buttercream eggs. I went to a fine candy store for these items. And of course there were marshmallow chicks, otherwise known as Peeps. Now it was only days until Easter, and I was standing in the generic aisles of Walgreen’s, shopping just to fill a basket because that is what I do. What is expected of me. What I expect of myself. I thought, “I’m going to announce that this is the last time. No baskets next year.” But I don’t know if I will. Maybe. That’s all I can say … today.

And this is part of my liberation story.

The week continued on in just this way, as if everywhere I looked, I was being called to change my story. It is not a comfortable feeling. It is a challenging feeling. I mean no disrespect by starting with the quote from Rabbi Lerner and talking about Easter baskets. I realize that they do not fit in the same category. The call to liberation begins large. It’s a sweeping feeling where change on a grand scale is fervently desired. Then it begins to move down into the everyday.

And that is the way of this Course.