Love’s freedom (from the ego) 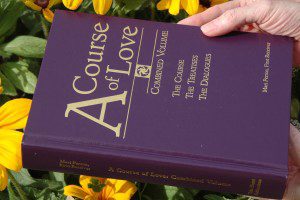 Your remembrance of the Christ-Self has abolished the ego-self and allows us to begin the lessons of the personal self. T3:1.13

Our freedom comes in release of the burden of not being who we are, the burden of the dictator ego, the declaration of our independence from it, or even better, our acceptance that it does not now and never did exist in truth.

While spending the day with ACOL reader/receivers in Sedona I felt a desire to face the belief in (or continuing acceptance of the existence of) the ego head on. I have spoken of this before, but never in a way of, “Let’s look at this.” In my preamble to the topic I spoke of meeting so many truly loving people who’ve read ACOL many times, and still speak of “their” ego—and so the suggestion—“Let’s talk about it.”

My challenge came in a way I didn’t expect—in a quite thoughtful suggestion that the ego can be befriended. I don’t remember word-for-word what I said in response, but it was the closest I know of to any statement I’ve made that might be considered dogmatic. I said something along the lines of this being an understandable idea psychologically, but that with the definition of ego given us in ACOL and the action we’re asked to take, this is not the call.

“According to A Course of Love.” Yikes! 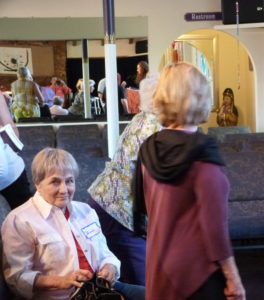 It was just after lunch when I suggested opening this conversation. We’d had the most lovely morning, but now it was afternoon.

I looked out at people in their “after lunch” slump, the bright enthusiasm of the morning dimmed, and probably in part due to my own discomfort in having said, “According to A Course of Love,” I moved us on and away from the whole subject before too long. A woman asked me a question about it later that I said I’d respond to by email. The question was, “How do I get rid of the ego?”

What an amazing thing that I had never been asked this question before. And that I had no idea how to answer it. I don’t know that I ever even thought of it in those terms. It had always felt to me that with the embrace of love and acceptance of truth, the letting go happened of its own. I have spoken of it mainly because I’ve felt that people judge their feelings and the thoughts that they deem negative as “ego,” and so the idea remains that until a certain perfection is reached, the ego is still part of their identity. I am really very good at encouraging acceptance of all feelings as feelings of love as we proceed, through The Dialogues, and our dialogues, as egoless selves. But the question of ego remains.

I could cite all kinds of quotes from ACOL on the topic, some that could be read as arguments against the ego, many that are appeals to accept the truth, few or none that specifically state a “how to” even while the whole of it offers many ways to acceptance. I found my acceptance in the felt experience of love and the uniting of mind and heart—the coming of wholeheartedness. When the heart and mind come together, judging and comparing one self (ego self) to the other (true Self), a “right self” to a “wrong self” begins to meet its end. These judgments that were carried so easily from ourselves to situations and relationships, quiet down. As within/so without.

In finding this unity within, the “righting” of all that prevented us from being who we truly are begins. These things are often challenging and even conflict inducing. Feelings of anger or sadness, grief or depression may arise…feelings needing room to be felt, expressed and healed. There may be calls to Self-empowerment seen as self-defense. Emergent Self-love might be seen as thinking too highly of oneself or being selfish. There may be much confusion about all this at first. How can I feel this way?  Yet it is love (not ego) that lets us turn confusion into clarity. We are “already there” and being held in the embrace that heals us into wholeness. 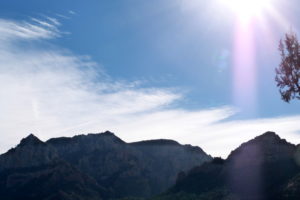 Who you are is love.

What happens first? An end to judgment? Or the advent of self-love? See what I mean? It’s all about love. In accepting love, the heart’s patterns begin to take the lead and you and I begin to see who we truly are. That is it really, the end of the ego. Yes, we’re told that some of the patterns “of the ego’s thought system” may remain for a while, but not “the ego” which is likened (in C:9.31 ) to “an imaginary friend.” Friend or foe, the ego is not real. It’s not “who” we are, and ceasing to identify with it is the way it meets its end, and is the end of having two selves. As much as love is crucial, the end of a “two-self” idea is crucial as well. The “first unity” is unity within. The “first unity” allows the acceptance of all that is and all that is yet to come, and the rejection of all that never was and never will be.

In this current election period, (as much as I hate to mention it) we’ve been seeing a crystal-clear demonstration of what happens when there are two sides doing battle. Love’s call is a call to no more battles. Love’s call is a call of unity. It won’t be seen “out there” until it is seen and accepted “in here.”

Each of you has had an imprisoned personal self. Each of you who have entered Christ-consciousness has had the cell door and the prison gate thrown open and a new world offered. If you do not “accept” this opportunity, you remain incarcerated in a system that tells you when you will awaken, how you will spend your day and when you will retire. You remain at the mercy of those who are incarcerated along with you. You remain at the mercy of those who would have power over you, and you remain subject to the laws of man. D4.5

Each of us can choose love’s freedom, the freedom of having one true Self, of living by the laws of Love, and of being able to be distinctly who we are within unity.