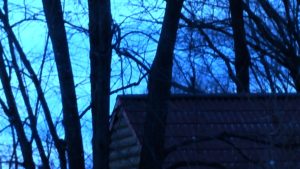 Close your eyes and begin to see with an imagination that is beyond thought and words. C:20.2

You have no capabilities that do not serve you, because they were created to serve you. The ability to imagine is such a capability, freely and equally given to all. Imagination is linked to true vision, for it exercises the combined capabilities of mind and heart. C23.18

I talk to Jesus. Do you? I talk to him a lot in my journal. New Year’s Eve morning I wrote:

“I feel, my brother, like I’ve let myself be tossed like your trees. I could make a thousand different pictures of them. And they’re just—“Yours”—and also being what they are.”

I sit inside now—looking out. Even my sun-room is too chilly early in the morning, and I make perches for myself where I can. Today I’m in the dining room sitting at a piano table crowded with plants. The table sits before a broad window looking out on the cabin and a view nearly the same as the one from there.

The table was my grandmothers, made of black walnut. My grandmother, my mom’s mom, had many of these 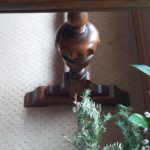 rather ornate tables and at some point she painted them all black. I ponder things like this. Why would she do that?

My first husband refinished this larger one. Two more sit in my basement but they’re both side-tables, fragile and unsteady. One is partially re-finished, the other…. I’m thinking it’s time to throw it away. I have a basement like this. It is probably the curse of basements and attics. We store things for “later” and then sometimes decades go by before we know it. These tables have been in the basement 20 years now. I’ve wondered if I could lose the spindly, unsteady legs and keep the ornate tops. Perhaps these I could refinish with less effort and hang as art. 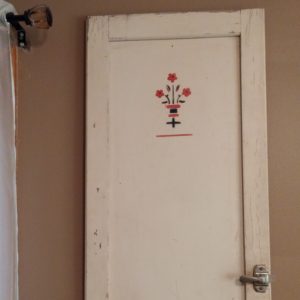 Two doors from a kitchen cabinet belonging to my other grandma hang on the wall behind my bed. This was the kind of “cupboard” that came before built-ins.

Why do we save? Why do we decorate, and decorate again for the seasons? Why is one person prone to such sentimentality and another not? Is it the veracity of memory? When my mom moved out of my childhood home I took pictures of the heat grates. They were heavy, wrought iron, intricate, and I knew them with my childhood senses, as I knew one grandmother’s cabinet and another’s tables. It is this “knowing” that I believe makes them retain their appeal.

I also, even though I had my own manger set by the time Mom moved out of her home of 40 years, took the one she was ready to let go. I could remember the trips to the basement to get it out of the storage room so clearly. Then the unwrapping. It is a very cheap set. One of the figures looks more like a cowboy than a shepherd. He has a bald head and holds his hat in hand. I remembered this head in fine detail.

This manger set has been sitting in my basement too. Mom didn’t decorate her place at all this year, so I decided to bring the old manger scene over and put it on her mantle. How surprised I was when she said, “I don’t remember that.” It wasn’t a matter of senility. She said, “I have a better one in storage. You can have it.”

She doesn’t share my memories, the way my child-like consciousness felt as I viewed these figures, as I felt them with young fingers, as I saw them with eyes that were fascinated still, by shape, color, texture and a pre-meaning sense of meaning. It also came, I know, from the familiarity of days when my home was my world…all I had to explore…and enough. Days when the big root of the cottonwood tree that protruded from the grass in our back yard, doubled as an alligator.

The heart’s way calls us back to memory and imagination and I don’t think it’s all that dissimilar to memories of childhood. Mom can recall every neighbor on the street on which she grew up. Maybe you can too. Do they matter, these memories, in and of themselves, or is our ability to recall with such clarity a reminder of a way of knowing that we lost and are returning to? A memory that travels, at times, even beyond childhood to a consciousness that was already alive and more vast than we allow ourselves to imagine now? Do we catch glimpses of this knowing when we return to pre-language memories? Or to those days of actual belief in Santa Clause or the innocence with which we prayed to be watched over as we slept?

My grandson Henry went to church with me Christmas Eve. He hasn’t been in a while. He asked if we could light candles. And so we arrived early and left our seats, bowed before the altar, and made our way to the statue of Mary. Henry put his own money in the slot, lit his own candle, knelt on the kneeler, closed his eyes, and joined his hands in prayer. I haven’t seen anything more beautiful than that this Christmas—maybe this whole year.

No matter what it was, or how short our times of living with the wonder of it all, they can call us to embrace wonder again…with remembrance and imagination. As I begin to put the decorations away, I know that looking forward without remembrance of the past is not—“for me,” a choice, a fault, or a virtue. It just is. Whatever it is “for you” that reminds you of wonder and inspires your imagination, is what I wish for you in this New Year. 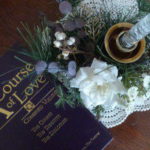