2.1 What love is cannot be taught. It cannot be learned. But it can be recognized.

Sometime last month I read that the sun was at its closest point to the earth but that it doesn’t feel that way because of the angle. The sun’s proximity would be hard to believe (here in Minnesota) except for the sun’s glare. I’ve been aware of this as I start my day in a kitchen where I can’t escape the kind of glare usually reserved for freeway moments. The sun blazed through the window over the sink, and it would soon became clear every task I did would end up involving the sink or nearness to it. I’d turn my back and, with another step, I’d be in the spotlight again. But then….

I got caught by the rays created by a glass sitting on the counter. I got my camera out. Soon I abandoned the kitchen altogether, and started taking pictures of the shadows formed in the dining room. As I did this, I noticed how I could angle the camera in different ways to bring items washed out by the sun’s brilliance, into greater focus. Eventually this idea of the way 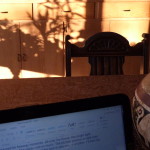 things are seen got my attention and I began to remember all the different ways I’ve seen things throughout my life; how what I see has changed; how what captures my attention has changed. And . . . how frequently I haven’t known what it was that moved me but only that I was moved.

Often, when “seeing” is spoken of, it’s not about seeing a glass on a countertop, but more in the way Paul spoke of it in 1 Corinthians. “For now we see through a glass, darkly; but then face to face: now I know in part; but then shall I know even as also I am known.”

I’ve asked ACOL’s new Facebook Group to explore their experience, to talk of how they feel rather than what they think, and I began to wonder. Do we know what we feel, or do we feel what we know? Jesus speaks of recognition a lot. As defined, recognition means “to know again.” And you know, I felt as if I’d hit on something.

Why, for instance, do I think spirituality, particularly ACIM, grabbed me in the first place? It was never a feeling of “Oh, this is good information.” It was never a feeling of enjoyment in the sense that I once enjoyed a good mystery novel. It wasn’t being attracted by a great writer, as I’d been so often. What was the feeling? And I’m suggesting it was a feeling I couldn’t see for what it was. All I knew was, “I want to stay here.” That’s the best way I can describe it. I did not want to leave the space I’d found myself in. With A Course of Love, I felt the same feeling only more intensely.

The feeling, I now feel quite certain, was one of recognition; of knowing again. Speaking of love, Jesus says in C:2.9,  It is precisely the inability of your true Self to forget that gives you hope of learning to recognize love, and, with that recognition, of ending the insanity you now perceive.

My early experiences began, actually, a great divide that felt like a divide between sanity and insanity. Inwardly, I had everything I needed. But outwardly? The world of society began to feel intolerable and overbearing. When I was engaged with “regular life” I felt, at times, as if I could go mad. I didn’t know what to do. I felt as if when I became the person who could engage in regular life, I was not in my right mind. That “two world” feeling was torture; like living in two incompatible worlds. Oh, the desire! The desire to live in a world of pure spirit! Oh, the longing to follow in that way!  But was it possible for me to walk away from my family and all the love and … let’s say … striving and drama and events and obligations that family comprised? No. So I needed to find a way to end the division not by “leaving” the world, but by being a true self within it. Whew! What would that even look like? Feel like? Was it even possible?

I slowly began to see, to recognize, that it was possible. I’ll be sixty next week, and I’ll be talking on a “Beyond 50” radio show. I am looking forward to it because of this feeling of possibility, but also because of the feeling that each of us go through this process of wanting to leave the world behind, and having to find our way to live as who we are within it. By the end of A Course of Love, it is clear that Jesus is guiding us to find our place in the world, to bring love to a world in need. And some of that, for many of us, begins to come more easily with age. It doesn’t have to wait on age, but I know that I have become more allowing, more able to let go, and more capable and committed to ending the great divide and living in unity.

You can listen to the show here, on or after this Wednesday morning, February 11.