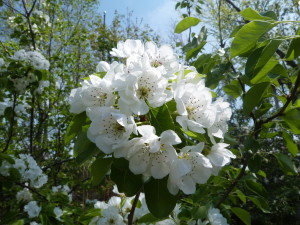 What hampers new beginnings of all kinds within the human experience are ideas that things cannot be different than they once were. T3:15.2

It is spring! Only one week ago, I was looking down from the airplane at the ground of my home town, seeing nothing but the drab colors of pre-spring. In a matter of days, lovely, sunny days, spring has sprung. It is no wonder I am thinking of new life!

It is also Sunday and I get to create. As onerous as it can feel when I have a deadline, or no particular inspiration with which to start, I still have the feeling of “get to.” This is time I’ve set aside. It is as anticipatory as my grandson’s play dates.

Still, sitting down empty-minded, I pick up Joyce Carol Oates to get myself in the mood, and there is nothing but ideas. Ideas upon ideas. Lovely and orotund language that calls me to little more than increasing my vocabulary.

Then I turn the page:

“The queer passionate impulse that overtakes me, as I write, to tell the story; to complete an emotional or psychological or narrative unit; to finish something that is begun . . .. None of this can be unique to me but must reside very deeply in us all . . . trying to plumb some ineffable center, some essence, the more profound for being so very secret.” (399)

Have you ever noticed that you get no inspiration until something touches on what was already there?

To finish something that is begun. To bring it to completion. New life is also about endings. Each 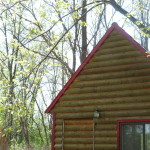 new beginning seems to take in all the endings and beginnings of the past. I look out the window at the sun rising and this point seems mute. I sit within the homeliness of the cabin. The bare bones of it like the individual life, essential and ephemeral; lasting and passing at the same time. Joyous and melancholy. The both/and of a rich life.

I decide to look up the use of both/and in A Course of Love. There are only a few instances where I thought there would be many. Yet the “feel” of such acceptance is contained throughout.

The both/and of endings and beginnings have been inspiring my reflection since my return from New York.  With a little remove from the whirlwind of it, I feel as if I have identified the source of my fervor: The desire for new life. It is in me and it is in many. The desire is palpable. It has arrived. It is contagious. 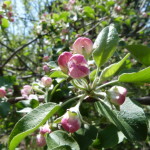 The beginning of new life arrives as “feeling.” The feeling puts you on notice that this is a happening. Your new beginning has begun. It began inside of you and it is bursting to become manifest. Change on a grand scale, change to the very nature of the self described by the words human being (T3:15.16) is predicted. Jesus says this calls for forgetting, and for letting go of limitations. But before he gets there, he also accepts our stories:

I love that last line: acceptance of the idea or the story that is you.

We, in all our various stories, are part of this happening. Yes, we are closing out the old even as we become the new. But “the new” feels so inclusive of “who we are,” of the stories that are ours. This “narrative” has been missing from much of new spirituality, as if “the story” has no bearing on what is or is to be.  I, at least, see the story as part of the uniqueness of who we each are and of what we each will bring forward. The re-writing of our stories can also be essential, and part of how we find ourselves newly. Yet re-writing does not mean deletion or invention. It means re-vision. Visioning newly. As we leave learning behind, such ways as revisioning become tremendous means of discovery, and sharing what we discover, is an exceptional means of enhancing our union in relationship as we create the new . . . together and as one.