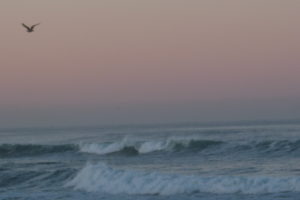 You are the virgin, the pregnant, the birth, and the new life. This is the way of the world as well as the way of creation. What is unaltered remains unaltered despite its many manifestations. Wholeness exists in every cell, in each of every smallest particle of existence. Wholeness exists in you. Nothing can take wholeness from you. It is as natural to you as it is to all of creation. It does not exist only once potential is realized or made manifest, but always in all things. D:D24.2

Early this year, and last year too, I spent a great deal of time preparing for my first presentation at the Course in Miracles conference. Just recently the video of that “main” 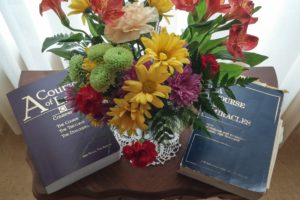 presentation became available and was made into viewable form.  It is now up on YouTube. https://www.youtube.com/user/perronmari

What struck me as I watched it came at the end—in the way I spoke of the coming of the Course—a way I hadn’t spoken of it previously. I spoke of it as what was long awaited having arrived.

Perhaps that also made viewing it the experience it was. Having had to wait in my desire to see the fruits of that creative time—it’s arrival—well, there’s such a feeling of completion in that!

The ideas of awaiting and arrival then prompted me (in that round-about way these things do) to bring up (from the basement canning room) our long-unused Advent Wreath. It didn’t remain “up.” There was something discouraging about the “church” definitions related to its use. I knew I could give it my own meaning, but by then the mood had left me. What remained was a contemplation on the “arrival.” Advent is generally thought of as a time of awaiting, but the word “advent” actually comes from the Latin adventus which means “arrival.”

Last year, as Christmas approached, I wrote this in my blog:

“The arrival marks a new season. We who have allowed the birth of the Christ within, are in this new season. It is present.”

A Course of Love began 18 years ago. December 1st marked the anniversary. Was that “beginning” the birth . . . or the gestation?  I asked myself this question because there is a new feeling in me, a feeling that perhaps this 18th year marks the coming into maturity of this baby of mine. Yes, I have felt myself to be the proud mother, nurturing this baby along.

Some weeks ago, in speaking to one of the translators of the Spanish edition of ACOL, Coralie Pearson, I felt that in her immersion in her work of translation, she truly understood what I experienced on receiving the Course. Then this week, Glenn Hovemann, ACOL’s publisher, showed me the work he’s been doing on updating (really re-creating) ACOL’s website. There is space on this new site given to the foreign translations and those working on them.  Reading other commentaries from translators, I knew that they had experienced this feeling too—especially Hélène Caron, when she wrote, “I sometimes forgot to eat.” Such little things say such big things! They speak of the total absorption that ushers in the new!

So many are feeling this now: the impregnation, the gestation, the birth, the maturing, the new life coming into its time of fullness. We are no longer awaiting. 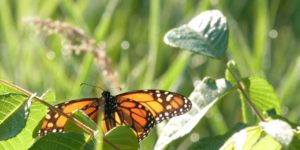 At the start of A Course of Love, Jesus speaks of the caterpillar becoming a butterfly, saying: You are well aware of the fact that if you could not see the transformation take place “with your own two eyes,” you would not believe that the two seemingly disparate creatures were the same. Someone telling you this story of transformation without being able to show you proof that you could see would be accused of making up a fairytale for your amusement. How many of you see the story of your own self in this same frame of mind? It is a nice fairytale, an acceptable myth, but until your body’s eyes can behold the proof, this is what it will remain. This is the insanity of the nightmare you choose not to awaken from. It is as if you have said, I will not open my eyes until someone proves to me that they will see when they are opened. You sit in darkness awaiting proof that only your own light will dispel. (C:p.40-41)

When we hear of this again in Day 24 of The Dialogues, we have changed:

Potential is what you carry, as air carries sound, a stream water, a pregnant woman her child. You carry your potential to the place of its birth through an activated will, a will that is also carried within you. This merging of will and potential is the birth of your power and the birth of the new. 24.9