The birth of the new

“Everyone” is just a concept. These words are given to each One. They are heard only by each “alone” by which I mean in the sanctity of the One Heart. We are one heart. We are one mind. Joined in wholeheartedness we are the heaven of the world. We replace bitterness with sweetness. We dwell in the reality of the One Heart, creation’s birthplace, birthplace of the new. (I.11) 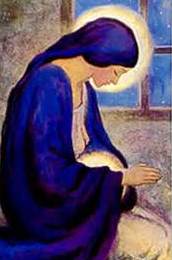 We exist in the embrace of love like the layers of light that form a rainbow, indivisible and curved inward upon each other. Love grows from within as a child grows within its mother’s womb. Inward, inward, into the embrace, the source of all beginnings, the kernel and the wholeness of all life. The whole exists untroubled by what it will be. It is. C:20.12

I returned early from my trip to Philadephia. The minute I left town, my expectant daughter Mia’s doctor decided it was time for her baby to come—via inducement (for a variety of reasons). Today, the baby still has not come and I’m about to be off to the hospital where Mia will be admitted soon.

When a baby is coming, life is narrowed down to “one thing only.” It is so precious when this happens. In my book, Creation of the New, I call this the Absolute. It’s what happened when A Course of Love came.

Before any of this became part of the plan for Philly, my theme had emerged as one of beginnings and endings. In A Course of Love it is the ending of the old and the beginning of the New. I don’t have the capacity today to share this well with you, and so am borrowing parts of my journal from the day I returned home. This event was so wonderful that I can’t let it go any longer without expression.

It’s 5:43 on Tuesday February 28, 2017, the last day of February and maybe the day my new grandchild will be born. There is no evidence of this other than that Mia’s been ready for 10 days.

The laptop is cool to the heels of my hands and at 6:04 the pink is diminishing by degrees and yet there’s still a murky fading, the way water looks under standing ice, ground having risen up and mingled with the melt.

My dear trees stand so still and tall. I am comforted to be home with the whine of the furnace coming on and off and the whiz of cars on the freeway going and coming, and my heart settling in. Sunrise is not for another 40 minutes. My phone is in my pocket, poised for news of a baby coming …..

6:18 and the violet sky is bluing, second by second.

And I am here, Lord, alone with you.

Thank you for this trip I have just returned from—for the catharsis of it.

I am aware that I was able to adjust to the atmosphere of being with these women and men, to let something go—to let something come. As we spoke of the movement of ACOL and its progression from head to heart and perhaps beyond to “gut” (as suggested during my BatGap interview with Rick Archer), it arose spontaneously in me to say, “No. Not the gut. The womb. The place of birthing the new. The place of conception.” This was all so purposeful, Lord! Mia’s “expectancy” and the beginnings of labor, and the stopping, and the waiting. Oh, Lord—it was so beautiful and so beyond this one birth. It was part of something bigger…as if you wanted to bring this home to us in a “real life” example, a “real life” way.

The word “expectancy” alone! What a lovely replacement for words like anxiety.

What an encouragement to leave behind words of the mind—words like “download” which is so commonly used. I know it works—it makes sense in our current lives—but it sure lessens the holiness, like leaving church, or temple, or cabin… and entering the office.

6:37 and definition has come to the yard. There’s still a murkiness at ground level, but the fence is clearly a fence, the trees are trees, the squirrel a squirrel. “I can “see”” we say. The dark leaves, the light comes, and we say, “I can see.”

And yet what I see in the murkiness is my best seeing! So many revelations about this over the weekend. As if it all forms in the murkiness and we only say “I can see” when light comes because of all that begins there. What was “coming” has arrived and the “seeing” is an attending to what is being born, and then to the life that has come.

The expectancy of new life.

The womb of the new.

The places of ordinary revelation.

And now there is new life again…in what was “formed” this weekend in our togetherness at the wonderful Center for Contemporary Mysticism. / 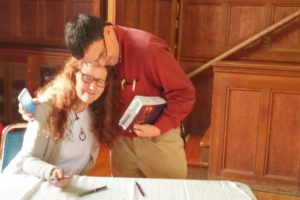 More to come later on this event and new life.

See the talk I gave as part of the Center for Contemporary Mysticism’s video series (the day after the ACOL event) here:https://contemporarymysticism.org/media/video-Perron-170226.asp

The photo at the top, of Our Lady of the Millennium was sent to me by Lady Burke who, along with Rhetta Morgan, provided music for the event. Elliott Robertson contributed poetry. I may share these at a later time, but for now I want to express such gratitude for them and for all (and there were so many) who contributed to this exquisite day of sharing. It will be “old news” before I get my photos ready to share, but I’m going to get some up and know I’ll keep sharing with the many I met and connected with. Thank you all.