Ascension. Enlightenment. Overcoming duality. For many of us this is the Big Goal. I realize this now. But once it was different.

As a teenager I started to read Jung and Blavatsky. It was fascinating. But I did not understand it, I now have to admit. I went through hundreds of books. I began to understand that meditation does not teach much if you do not realize how and why. To practice, to forgive, to let go, the search for the higher has little added value if you do not really “understand” it. 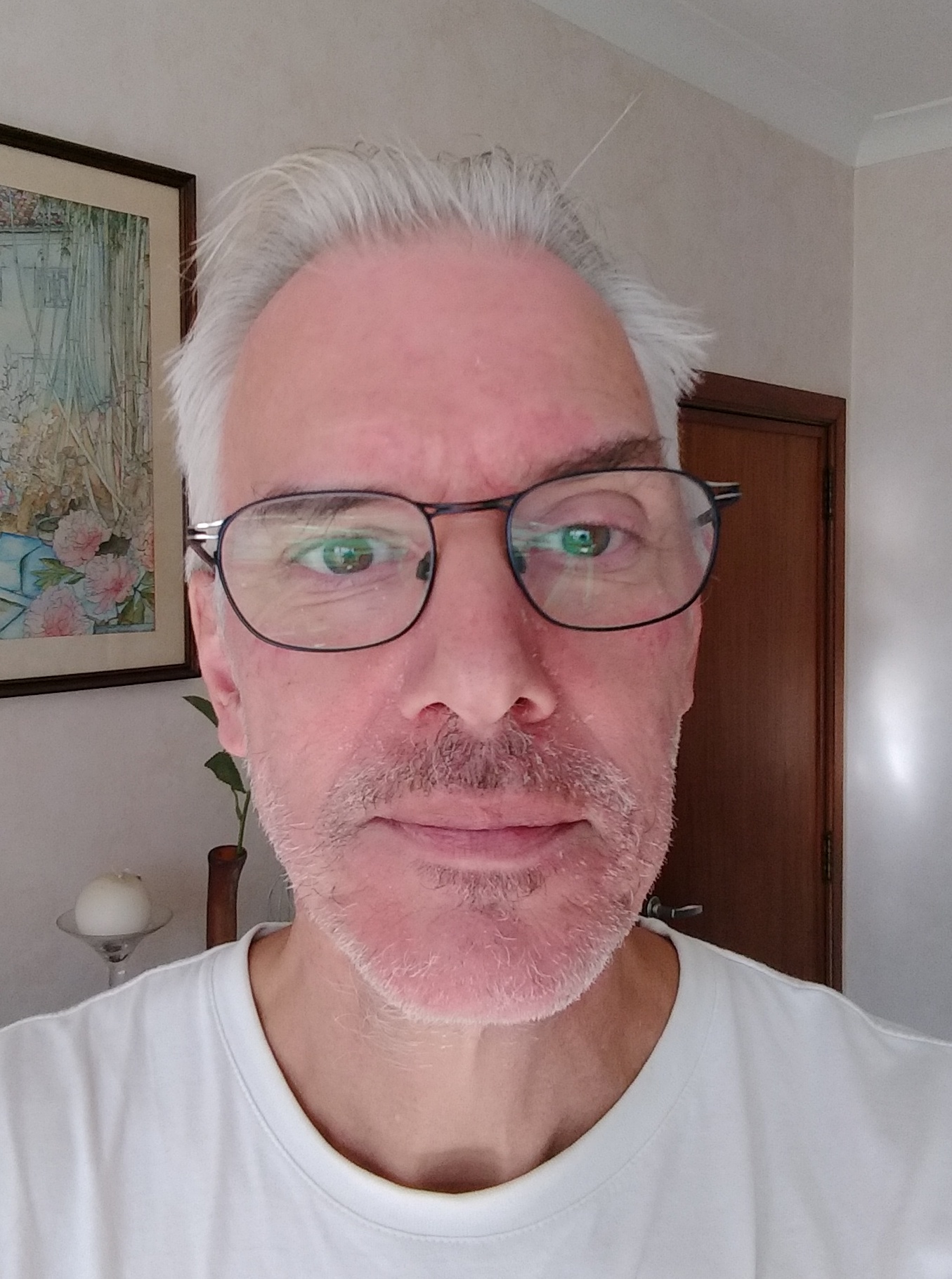 With understanding I do not mean being able to repeat it, like at school; like getting your diploma and then forgetting it already the next day. I write today about deep understanding, specifically about “cause and effect.”

I hope to offer a few hints about duality, what it is and how to transcend it. A few words of support for those who need it. I would have loved receiving this earlier. Who knows? It can save a lot of time and effort.

“Ascension” literally means taking off. You rise up and see from a higher, broader perspective. Your view is more objective. You have some distance. You view the world from higher energy.

We grew up in an environment of cause and effect. If this, then that.

We accept as normal that external elements’ influence us. An invoice has to be paid, a gutter repaired, a person may act oddly and confront us. “I can’t get my way,” we complain. “This is not how I want it to be.” Sooner or later people or things force us, unwillingly, in one direction or another.

We feel driven, forced by “cause and effect.” Yet at the same time we endorse “cause and effect,” we even demand it to exist from our ego point of view. I want this now, and I want it like that!

This is base line of the survival of the fittest.

We openly say that we want to transcend this framework, and that certainly may be true. But we can hardly let go of the unconscious blocking belief that we want it our way. And thus nothing really changes.

That is the point of view of what we call the third dimension. After this comes that. After the rain will be sunshine. What goes up must come down. Gravity is normal, logical, self-evident. But is it true?

Quantum physics say that gravity is relative, depending on how you look at it. But do we apply that?

As long as you continue to listen to your ego you will not understand giving and receiving as one and will not believe in it. This is the most difficult belief of all to integrate into the living of your life. (ACOL-2T:7.6-7)

The ego cannot understand that it is both cause and effect, that giving and receiving are one. It is tired, and rightly so, of being only the effect, of being forced to be a log on the river of life. It is tired of having to float on the ocean of experiences without ever seeing land. Submerged by wave after wave of cause, the ego is tired and weary. Fed up. The ego wants to be “the cause,” if only for once. He / she wants to take a turn. My way, my desire.

But please realize: Christ consciousness is knowing that you are cause AND effect, effect AND cause. You are both. You are One. You are Unity. Relationship is the only means . . . to change that which you would change. (ACOL-T2:7.9)

Ascension is the process from state 3 to state 4.

In state 3—3rd dimension—view 3—frame of reference 3—grade 3, cause and effect are seemingly separate. Unity is a fantasy. Duality-consciousness is the basic underlying framework. Duality makes it appear as if cause and effect are separate. In state 3 time and space are at our disposal to place ourselves between cause and effect. So ego does that, to the best of its ability. It takes the load (cause) on its shoulder and drags it over to where it is convinced that it can drop it, being released from effect. Another cause set free of its burden! Another construct built, another “solution” given birth!

Yet only more water (emotion) has been brought to the sea.

Heart does that, to the best of its ability. The heart takes up the task and expresses it. But now the task of “moving” does not make sense any more. In what direction should it go? Cause and effect, giving and receiving, are not separate any longer. There is no “space” between them. The heart cannot “do.” It can just “be.” Space has become relative.

Heart becomes, to the best of his/her ability. But who or what will he/she become? It IS already. There’s no future, or is there? There is no transformation that needs to “become” from the past, or does it? There is no “time” to bridge (to become / to move). He/she IS cause and effect. He/she can no longer become, but already is.

This mystery of time and space, informed also by the point of view of quantum physics, is relative. From the ego’s need to name and quantify everything, the black hole becomes the new basic framework of the 4th dimension. Or was it so already all the “time”?

This course was written for the mind—but only to move the mind to appeal to the heart. To move it to listen. To move it to accept confusion. To move it to cease its resistance to mystery, its quest for answers, and to shift its focus to the truth and away from what can be learned only by the mind. (ACOL-C:I.1)

Entering the unknown in this way, in this frame or dimension, is stepping up to the 4th dimension where time is relative and our will is freed. It is Ascension. You are no longer pushed around. The will is freed in the 4th dimension because there are no more forced movements or lessons. There are no external influences to bully us. There is a choice/space beyond time where “we” are no longer dragged from sunrise to sunset. Gravity is gone.

Ascension is the transition from state 3 to state 4. It is moving to the next grade, but only after state/grade 3 has been understood. It would not make sense to advance from grade 3, duality, if you have not understood it, lived it thoroughly. The transition to the next grade / state is easily compared with our current schools. Duality is like learning to read and write. Grade 3 is being immersed in duality. This is letter A, that is letter B. Now try to write it yourself. You are not asked to write that which does not exist. No, you are asked to write A, B. You only get grades for doing just that. That is duality. You are indeed “forced.” You cannot really choose. The goal is to learn to read and write. The goal is to understand duality. Duality is the grade where you learn what “cause and effect,” what “giving and receiving” is.

Only when you have mastered that, you can pass, or ascend, to the higher, to Christ consciousness.

That is the goal, and life does everything possible to get you there. But do you understand the goal?

In grade 4 you are the pencil. The story of yourself is being written through you in your Oneness. You write your own book of life in grade 4. You are not being taught any longer.

Jesus passed the final test of grade 3 with flying colors, they say. That is why he is called Christ, something like “passed.” Turns out he has written a manual: The Atonement. It is a manual how to reconcile cause and effect, giving and receiving, to learn they are one. Jesus wanted to prepare future students to pass.

I am in charge of the process of Atonement, which I undertook to begin. . . . My part in the Atonement is the cancelling out of all errors that you could not otherwise correct. When you have been restored to the recognition of your original state, you naturally become part of the Atonement yourself. . . . The power to work miracles belongs to you. I will provide the opportunities to do them, but you must be ready and willing. Doing them will bring conviction in the ability, because conviction comes through accomplishment. The ability is the potential, the achievement is its expression, and the Atonement, which is the natural profession of the children of God, is the purpose. (ACIM-T-1.III)

ACIM and ACOL are perfect books on a 3D level. They are manuals for the final test of the 3rd grade. But even more, Jesus made those same manuals for beginning students of the 4th grade.

But paper books do not exist in the 4th grade, of course, simply because “learning” is over. No more letters to practice! No more learning with the brain / ego. That is over. You can really start being “your” own book of life. It is time to be cause and effect, together.

Do you understand this? For real? Then I am very happy.

Eric Huysmans, 58, lives in Mechelen, Belgium. Jesus recently asked him to live with his elderly mother for her support, and for him to be free to dedicate his days to Ascension and the “higher dimensions,” as he calls it. For decades, Eric struggled with an existence in duality, looking for meaning. Slowly he understood that if there is a goal in his life, he could not look to any outer authority for it. That is how he met his inner voice. Recently he discovered that to rise above duality one needs to “merge” with the “one mind.” Does this make him special? No, he says, just unique—as each one of us is. He may be reached at huysmanseric.muizen@gmail.com 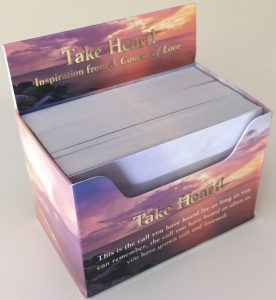 Each of these 180 cards is selected  to remind you that you are, in truth, an embodiment of love. Purchase at the ACOL Store or on Amazon. Only $18.95

All Things Change When We Do

And spit their morning tears

As I pace the ferry docking point

On the shore of County Clare

but I fear the deep, deep sea.

The Atlantic heaves its belly round

As the old boat ventures out

A plaything before the gods

And the grim fog hides the land ahead

The Aran Islands and Innismor.

So sea-leg sure the sailors move

But I sit clench-jawed stiff

And where sea meets sky I close my eye

Too rocking-horse crazy for me

Of the boat to Innismor.

As I prepare to leave

My deep bones now are whispering

On the Island of Innismor.

On the galloping port side deck

I lify my face to the heavens

The horizon now my strength

and the wind is a mighty lover

As I return from Innismor.

Surprised I am by freedom’s touch

And heady with relief

I know not how or why the change

But I know I learned to trust

And that old fool fear was lost for a time