The great change of which I am a part 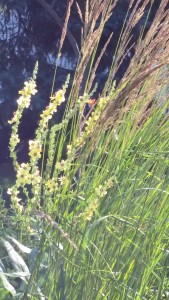 This time of concentration on the self is unheralded in history. It is what has been needed. Be grateful to all of the forerunners of the new who have been courageous enough to call you to examine yourself. Be grateful to yourself that you have had the courage to listen and to learn and to study what these forerunners of the new, these prophets of the new have called you to learn. Be appreciative of every tool that has advanced your progress. But now be willing to leave them behind. T4:9.7

When I head back inside, I have the feeling of wandering. Drifting from one thing to the next. I pick up my word puzzle, the one called “Wonderworld” in my daily paper, the one where you find and circle the letters of words. This morning’s puzzle is on sleep patterns. I start with “tern” and find “patterns.” My pen glides smoothly, making circles on the absorbent newsprint. “Ages” becomes “stages.”

A year or so ago, I switched from crossword puzzles to these. I like forming the circles. I like 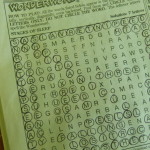 forming the words. I like it that I don’t have to think, as I did with crossword puzzles. I am mindlessly tinkering with words and letters. Mindlessly occupied. This morning I see it as a metaphor.

There is no sense of getting better at my Wonderworld puzzle, as there had been with the crossword puzzle, which I started out struggling with and felt pride in as I improved. Donny did the New York Times crossword and I did the “other” one, the easier one. We sat quietly at the kitchen table with our own sections of the newspaper. Mine was on the page with garage sales and job postings. His next door to the comics. Sometimes I’d ask him about a word. He’d say, “How many letters?” Each time he’d come across a question about an author or literature, he’d ask me. It was one of my favorite parts of the day, gained after years of getting kids out the door. A “married couple time” of finding that unique combination of being together and yet not occupied by each other or the concerns of a home. A time of sitting contentedly…yet exercising our brains.

Now I shape circles, quietly, carefully, with my black medium-point pen that glides. I remember my mom saying that in the early days of being taught penmanship, the teachers would have the children make circles upon circles across a page, getting their hands ready to move the pen in the motion of cursive; a skill no longer taught. Pride in penmanship is becoming a thing of the past. It is not useful or necessary.

As I construct my words from their letters, all this runs through my mind without coming in words until I am back to the cabin and realize the words are there. I sit down again, once again following a thread that appears unrelated to anything at all. Ideas, musings, they seem to come as “directions.” I am being moved in this way. I am following, not leading. I am in a certain flow that is going somewhere even if it appears not to be. I am left to connect the dots as I connect the letters into words. I am combining, seeing newly, watching words becoming what they are.

Feeling dazed by change for a while, I have thought it was about this or that. The feel of change was accentuated by Ivor’s death, which seemed to come as change on top of change—taking change from the specific and personal to the profound and the universal. Change that is a direction but not a map. Change that is turning from head power to heart power. Change that is turning from separation to union. Change that is about acceptance. Change that is picking up speed. A quiet revolution. And change that is, just possibly, a movement to being able to be at peace within change. To being change. Change that includes accepting what I don’t want to change too. To accept those things about myself that won’t change—because I like them. To realize I like my serious, contemplative side; that I like taking “short” walks, that I like my coffee “hot” no matter that it means continuously reheating it. That I like the mindless word puzzle over the one that requires the use of my brain.

Accepting, too, the fervor that comes of imagining that I can have something to do with changing the world. Jesus changed the world.  I do not forget that his Courses are also alive in people around the world and that they are changing the world. In Day 2 of The Dialogues Jesus says, “You have let go the ego, re-viewed your life, unlearned previous patterns, and now see the difference between the image you hold of yourself and your present Self.” But then he goes on to say, and I love this, that we have not as yet developed the capacity to accept this fully.

This capacity is what I suddenly have come to see has been developing through change. Like putting letters together into words, this dawning idea has filled out a picture. The new capacity arises in sudden bursts. It arises and spills out. There is hopefulness. It is a “great arising” as it comes into expression, full of passion and pathos. Part of it is a desire to see the world’s needs met. What I want for myself, I want for the world. I want to live in harmony and abundance and simplicity. To live quietly, without the shrill noise of discontent, conflict, injustice. Yes, I want to change my world and the world.

I’ve wanted to change the world ever since I began to feel its pain and mine as if they were one. I was maybe 14 or 15 years old. The years of Vietnam and Nixon. The time when the middle class bred hippies went to college and dropped out of the world of their parents’ lives. When the circumstances combined into an arising that couldn’t help but reach out and announce newness. It was change so quick and vast that life felt totally different in 1970 than in 1965. It was a change that called for . . . change. How could anyone remain the same?

These months of tussling with change have had a purpose. Of that I am certain. I am developing the capacity, slowly, painstakingly, for the great change of which I am a part.

I was least accepted as prophet and savior by those who were most like me, those who watched me grow, worked alongside my parents, and lived in the same town. This was because they knew I was not different from them, and they could not accept that they were the same as me. They were then, and you are now, no different than I. We are all the same because we are not separate. God created the universe as an interrelated whole. That the universe is an interrelated whole is no longer disputed even by science. What you have made to hide your reality has been, with the help of the Holy Spirit, being turned into that which will help you learn what your reality really is. Yet you still refuse to listen and to learn. You still prefer things to be other than what they are and, through your preference, choose to keep it so.

Make a new choice! The choice that your heart yearns to make for you and that your mind is finding increasingly difficult to deny. When you choose unity over separation, you choose reality over illusion. You end opposition by choosing harmony. You end conflict by choosing peace. C:6.4-5