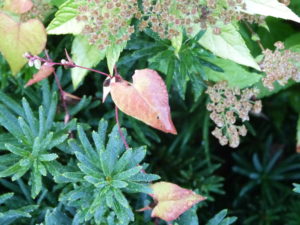 The mind cannot hold open the doors of the heart and yet we turn within, turn to the mind, and show it where its openness lies, where sweetness abides, where love’s knowing is found. All the mind can do is rearrange reality and hold it still and captive and rule bound. The laws of love are not laws such as these. The laws of love are not rules, facts, or right answers. The laws of love bring spiritual freedom, the freedom that lies beyond belief, beyond thought, beyond adherence to any authority other than one’s own heart. I:5

ACOL is a challenge to authority. This challenge may be the most controversial thing about it.

What an appropriate time it is to re-view and remember all Jesus says about accepting our own authority. These excerpts from A Course of Love relate brilliantly to what is going on in the world, but, as always, bring us back to what exists within us and can change as we change—as we cease to look to outside authorities. And so, in an unusual move, I invite you to re-discover the gift of the heart’s authority through these selected passages from The Course, The Treatises, and The Dialogues. In addition to being a comprehensive look at how Jesus presents the authority problem (and solution), they also show the difference in the way we are addressed as we begin the Course, the many invitations that offer us more, and our assurance that we can, will, and finally “have,” in union and relationship, accepted our own authority, the authority by which we can share in truth. 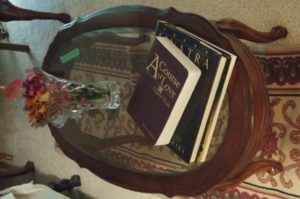 (Maybe it’s one of the things you realize newly with the death of a parent (as I wrote of last week). My dad died ten years ago. And now my mom is gone too. Perhaps upon becoming parent-less, you suddenly feel as if you are of the generation of elders in a new way. This photo of ACOL was taken at Mom’s. It took this new publication before she had it out in the open, on her coffee table. Me being the first receiver of A Course of Love was not particularly comfortable for her. When the combined volume made its way to her coffee table, sitting right on top of her book on Sinatra…I’d made it to the big time!)

The old way of viewing authority:

C:7.21 You have given others, whom you see as having more authority than you, license to provide you with their version of the truth, and for consistency’s sake you choose to believe in the version of the truth most predominate in your society. Thus the truth is different in one place than it is in another and it even appears to be in conflict. You cling to known truths, even though you are aware of their instability in time as well as place, and so you live with constant denial that even what is known to you is not known at all.

C:16.21 While you want those you have given power to protect you, you also fear them, and they in turn fear the powerless who might take away their power or rise up against them. What kind of power is it that needs to be constantly defended? What is it about the powerless that frightens you, except that they might not accept their powerless state? And what does this say but what history has shown you—that who is powerful and who is not is not determined by might or any authority that can be given and taken away. Power is possessed by those who claim it. By those who cry I am. For the beginning of power comes from the rejection of powerlessness. The rejection of powerlessness is but a step toward your identity achieved through the awakening of love of Self.

C16.22 What misery the world has suffered in the name of judgment, power, and justice. What misery can be avoided by finding the true power inherent in your identity. For you are not powerless. Those of you who think you have traditional means of power on your side turn not to your own power, and then you wonder why those most spiritual, both currently and historically, seem to suffer hardship. Yet it is often only those who suffer hardship who will rise up and claim the power that is their own instead of looking for it elsewhere. Your perception but looks at power backward and wonders why God has forsaken a people who seem to be so godly.

C16.23 God forsakes no people, but people forsake God when they give away their power and claim not their birthright. Your birthright is simply the right to be who you are, and there is nothing in the world that has the power to take this right from you. The only way you lose it is by giving it away. And this you do.

C16.24 God wants no sacrifice from you, yet when you give away your power you make of yourself a sacrificial lamb, an offering onto God that God does not want. You look back on stories of sacrifice from the Bible and think what a barbaric time that was, and yet you repeat the same history but in different form. If a talented physician were to give up his power to heal you would surely call it a waste, and yet you give up your power to be who you are and think it is just the way life is. You give away your power and then bow down to those whom you have given it to, for you are afraid of nothing more than your own power.

C:16.25 This fear but stems from what you have used your power for. You know your power created the world of illusion in which you live, and so you think another must be able to do it better. You no longer trust yourself with your own power, and so you have forgotten it and realize not how important it is for it to be reclaimed. As good as you may want to be, you would still go meekly through your life trying to comply with rules of God and man with thought of some greater good in mind. If everyone did what he or she wanted to do, you reason, society would collapse and anarchy would rule. You think you are only fair in deciding that if everyone cannot do what they would want, then you, too, must abdicate your wishes for the common good. You thus behave in “noble” ways that serve no purpose.

C:16.26 If you cannot claim at least a small amount of love for your own Self, then neither can you claim your power, for they go hand-in-hand. There is no “common good” as you perceive of it, and you are not here to assure the continuance of society. The worries that would occupy you can be let go if you but work instead for the return of heaven and the return of your own Self.

C:20.32 Acceptance of your true power is acceptance of your God-given authority via your free will. When I beseeched my Father, saying, “They know not what they do,” I was expressing the nature of my brothers and sisters as caused by fear. To accept your power and your God-given authority is to know what you do. Let the fear be taken from this area of your thought so that you can see the application of cooperative action. As long as you fear your own ability to know what you do, you cannot be fully cooperative.

And so we follow the way of creation, and begin the dance of cooperation.

C:20.33 The rest of the universe, existing in a state of compassionate free will devoid of fear, knows what it does. There are no opposing forces that are not in agreement about their opposing force. No atoms do battle. No molecules compete for dominance. The universe is a dance of cooperation. You are but asked to rejoin the dance.

We begin to read newly, and to move beyond learning to our heart’s wisdom and to co-creation:

T4:11.5 … I bid you to read these words in a new way. You are no longer a learner here and what I reveal to you must be regarded as the equal sharing between brothers and sisters in Christ, the sharing of fellow creators in unity and relationship. This is the beginning of our co-creation. Do not seek for me to impart knowledge to you in these concluding words. Absorb the following pages as a memory returned to your reunited heart and mind. No longer regard me as an authority to whom you turn, but as an equal partner in the creation of the future through the sustainability of Christ-consciousness.

D:2.22 Within is where you look to your own heart, rather than to any other authority, for advice or guidance.

D:4.24 Let this acceptance of your own internal authority be your first “act” of acceptance rather than learning. Turn to this as the new pattern and to the thought system of giving and receiving as one. Let the authority of the new be given and received. Become the author of your own life. Live it as you feel called to live it.

D:4.26 I tell you truthfully, your release is at hand and it will come from your own authority and no place else. It is up to you to accept that your release is possible, to desire it without fear, to call it into being.

D:12.18-19 Some of you will have credited your personal or individual self with the “figuring out” of this truth. Others of you will have recognized the “voice” of authority with which this truth came to you as something other than your usual thoughts, other than your usual “self.” Either way, however, you know that your self was involved, somehow, in this coming to know of the truth, even if this coming to know of the truth wasn’t quite “of” the “you” of the personal self. The thoughts that come to you from unity can thus be seen as both your own thoughts and thoughts that arise from union. Union is not other than you, as I am not other than you. Union includes you, just as the All of Everything, the whole of wholeness, the one of oneness, include you. We are, in unity, one body. We are, in Christ consciousness, one Christ. We are, in wholeheartedness, one heart and one mind.

DDay:3.39 When you have felt the reality of union, you have felt the place in which no want exists. You felt this through the responsiveness of the relationship that is unity. You perhaps desired an answer that “came to you” through no process you had known before. We spoke of this as thoughts you did not think. We spoke of these thoughts you did not think coming with authority and certainty, a certainty you had previously lacked.

We move to what can only be given and received in relationship:

DDay:13.11 [Y]ou may feel unable to share or express all that comes to you from unity, and while you may feel unable to share or express the authority and truth you know it represents, you will, by living according to what you know to be the truth, form the very relationships and union that will allow the truth to be shared. The relationship or union, in other words, precedes the sharing of what can only be given and received in relationship.

DDay:15.13 It is to your own authority only that you must appeal for guidance.

You will, by living according to what you know to be the truth,
form the very relationships and union that will allow the truth to be shared.