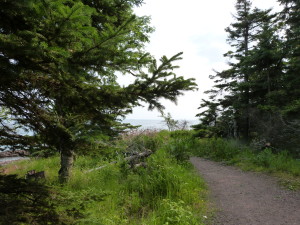 The mind goes from the small to the large, the heart from the large to the small. Only the wholehearted see the connection of all. C:23.12

It’s 5:52 in the cabin.  The sun’s imminent rising is visible as a streak of light-infused coral. The frogs or crickets hum in their chirpy way.  5:55   I sit up. Look out again. There’s a fiery quality beginning to build. At 6:02 the sky has faded into cloudy, cotton ball forms in baby blues and pinks. What can happen in ten minutes!

There are things that have arisen in me as sweetnesses of the heart lately. The latest was the Door’s song that goes like this: Hello. I love you. Won’t you tell me your name? These lyrics were running through my mind this morning when I suddenly realized they were like the perfect greeting for God.

The first was perhaps my new love affair with my percolator. It’s an old thing, given me by daughter Angela, purchased in a second- 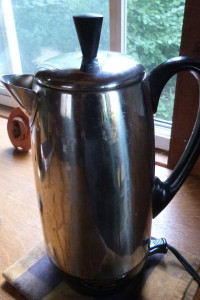 hand store, or perhaps at a garage sale. It’s been a constant in the cabin for a while now, but some months ago, one prong of the cord broke off in the outlet. I thought I could get by without the old girl, but truth be told, nothing I tried to have hot coffee in the cabin worked. So I finally examined the pot for information so that I could order a new cord. Although I’d been using it for years, and knew it was a Farberware pot, I had not known it was the “Superfast” model. Since ordering and receiving my new cord, I have noticed how fast it is, and just adore hearing its perking once again, and the always hot coffee it provides. I felt so grateful for it, but the tempo of my gratefulness felt sweet. Thus it began. 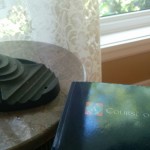 The next in this series of sweetnesses came from a long-time reader of ACOL, my friend in Canada, Roger. He noticed my lamp in the photo I began to use to show A Course of Love early in July. I first posted it in a blog in which I spoke of another friend—Ivor’s—passing. It was 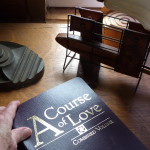 as though suddenly, the “stock” photo of A Course of Love was not appropriate. Everything in me was too tender to include an impersonal image.

Roger responded with his photo of his lamp and his (blue book) copy of A Course of Love. Thus began our conversation, but one that wasn’t only about the lamp, although I loved it having begun in that way. It felt like a sweetness that Roger noticed the lamp in my photo and was moved to share his. In response, I handled my lamp in a way I hadn’t in years. Turning it over, I found a patent number and shared this with Roger, along with the rather unfortunate news that this was not an heirloom with an interesting history. I’d bought it at an antique store. Roger, in turn, shared that his lamp bore the name “Eagle,” and that it did have a history. It belonged to his father, a lamp he remembered from his young boyhood, and decided to keep when the family home was sold. Until seeing my photo, he’d never seen another like it and said it was even more funny that it was used to light up our same readings. He signed off with, Cheers from Boisbriand, and I fell in love with the sound of Boisbriand, the muted and romantic image of his book and lamp, of the “lighting up” of our shared readings, and Roger himself. When I asked if I could share his photo he replied:

To share freely all we have received, is the Principle that rule the Life, and mine too. 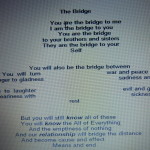 Then I heard from another friend and reader of ACOL, Ben, who was “stopped” in that awe-struck way by Day 39 of The Dialogues and made a representation of a passage of it that he calls “The Bridge.” I couldn’t download it, but I took a screen image just to be able to share and emphasize the joy I felt in receiving it; in receiving a “creation” made of such a moment of impact. 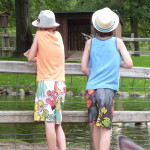 arms when I reviewed photos from our excursion to an animal farm. Suddenly, in these photos, (despite his skinniness) I could see the arms of a “man” beginning to develop.

The heart goes from the large to the small.

I’m in awe of the tenderizing of the heart that goes on as this movement from the large to the small takes place. The large is perhaps our grand awakening to all that we are. The small is the daily ways we encounter those things that touch our hearts. I need not discard these things as “small” (as in trivial or unimportant or sentimental), and surely not as a backwards movement. It is the way of the heart. Part of the movement to sanctifying all of life. Each of us can invite the “small” and hold it gently. It is cradling a wounded bird (as happened this morning as one slammed herself into my window), and it is the sun’s rising. It is what can happen in ten minutes. Another movement along the heart’s path.

The awe of Day 39 of The Dialogues, the splendor of the sun and of young arms forming muscle, of the pleasure of a percolator and a lamp, are the sharing of the small and the large that join on the path of the heart. It is revelation of the immense Heart holding it all, including all the sweetness of our own human hearts, that join us together in wholeheartedness.