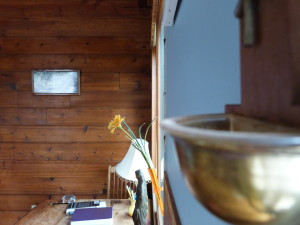 “Who is this “I” who writes?”, Joyce Carol Oates

It was Friday night when this “I” who writes began to form a blog post in my mind. It was a response to the woman (me) who has been writing the posts of the last month or so, the one who was full of exclamations about New York, and then last week had “Something to say.” I was feeling kind of mad at her. Didn’t like her much. I was feeling the stirrings of wanting/needing to get back to having nothing to say. Nothing to write. Just writing. That seems to be where the “I” who is the writer really gets her chance. That “I” . . . who wanders around in life, who meanders, who watches squirrels and bunnies (and a raccoon just the other day), whose attention is rapt, who watches the sun rise. The one who dwells intimately with herself.

I was dwelling “uncomfortably” with myself, wiggling my shoulders, scratching my head. Then I began to wonder, where does the “I” who is a writer go? Friday. Saturday. Sunday come and almost gone. Still nothing.

So I read a bit through my journal, trying to get an idea. (You see, I am tenacious, and I sincerely believe all creative people are and must be.) When I found this entry, I thought, what the hell, I’ll just share it. Share with you what it’s been like to record the audio of A Course of Love. It turned out to be the perfect thing to do:

The moon is hiding out behind the cabin in a spot I’ve never seen it in before. It feels low to the ground. Thankfully I do too. Hiding out. I don’t mind it.

Everyone is down the list from you, Lord. Or from the creative life. They’re so joined that I don’t know the difference. I’m happily reading a book called The Courage to Create, finding Rollo May getting in his own way, and yet still saying things I need. He says creativity is an “encounter.” He talks of how it uses a different side of the brain. How you forget to eat and time disappears. The “survival” mechanism gets turned off! Maybe that’s how artists manage to be poor artists.

In the house, The Embrace is taking forever. I was so happy last week, thinking what used to take me a week was down to three days. Afraid not. I must need to hear the Embrace over and over. That’s all I can figure. I need to feel held in “your” embrace. I am in need of truly feeling the support, the gentleness and the love. The sense of the benevolence of the universe of love. To really get the idea that I am not living within the same world, the same universe. The one that is full of cement buildings and people that would as soon do me harm as good. This has been demonstrated to me. I have moved in. I am not locked out.

Still, the feeling comes of not being able to rest until The Embrace is done. Can’t move on. Just plod away, plod away. Listen. Fix. Listen. Fix.

Yet I miss writing so much! It’s not that I’m not thoroughly engrossed in the audio. The thing it does is it’s taking me out of my life while at the same time it is providing insights into it. It’s like “it” . . . or you . . . are transforming my life without me having to work at it. It is inexplicable. But that is the way with creativity. This chapter, of all chapters, had to be re-created. It has to be what it is and it has to be a new expression of what it is—through me.

I suppose, Lord, if I were to start writing well, and not want to stop, I’d never get the audio done.