There must be a better way 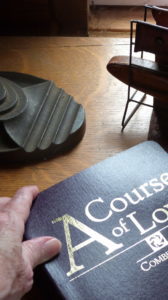 To proceed into each relationship as who you truly are is to bring everlasting change to each and every relationship, and thus to all. T2:7.12

I’ve been doing taxes. Unfortunately, I can’t just get on Turbo Tax and “get it done.” So this year, after having spent a week with paperwork spread across my dining room table, (and I know many of you go through the same ordeal) I am in a “there must be a better way” frame of mind. I got there partially because I found myself feeling resentful about the whole matter.

This feeling caused me to look up “resentment” in ACOL, and also to be ready to hear the “how to” sounding ideas put forth to get to “a better way.”

I found them in the multi-layered and revealing Treatise on Unity, Chapter 7, where Jesus is speaking of giving and receiving as one.

This is the most difficult belief of all to integrate into the living of your life. Each time another thwarts you, you will be tempted to believe that giving and receiving as one is not taking place. Your previous pattern of behavior will be quick to assert itself and you will feel resentment and claim that the situation is unfair. T2:7.7

Yes! That was me! The situation is unfair! That’s how I feel about taxes and other such complicated requirements! I feel it “shouldn’t” be so hard.

A bit later Jesus says: “Relationship is the only means through which interaction is real, the only source of your ability to change that which you would change.” T2:7.9

Oh, yeah, I tell myself. This is the treatise on “unity.” And of course he’s talking of bigger things than taxes or any of the peevish matters required of us in today’s world. He’s talking about life and relationships and the change from the old to the new.

Then he starts getting downright inspiring:

To proceed into each relationship as who you truly are
is to bring everlasting change to each and every relationship, and thus to all. T2:7.12

This new attitude, then, includes accepting that you have needs. That you are a being who exists in relationship is the same as saying you are a being who needs relationship. The only thing that keeps you, in this new pattern, from being needy and dependent in an unhealthy way, is that you believe in giving and receiving as one. You believe, in other words, that your needs will be provided for, thus ceasing to be needs. To deny that you are a being with needs is not the aim of this Course. To come to believe that your needs are provided for by a Creator and a creation that includes all “others” is to believe in giving and receiving being one in truth. T2:7.14

Giving is not only about choosing what good and helpful parts of yourself you will share with the world. It is also about giving the world the opportunity to give back. T2:7.15

Trusting is not a condition or state of being that you have heretofore seen as being an active one. Your attitude toward trust is one of waiting, as if an active stance toward trust would be distrustful. You thus will often say that you trust when what you are doing is hoping for a specific outcome. Real trust is not a trust that waits and hopes but a trust that acts from who you truly are. Real trust requires the discipline of being who you are in everycircumstance and in every relationship. Real trust begins with your Self. T2:7.16

And so, I called my tax preparer and said, “There must be a better way. Can you help me?” As mundane as this example is, it’s a powerful reminder (at least to me) to let the “new way” serve all areas of life.