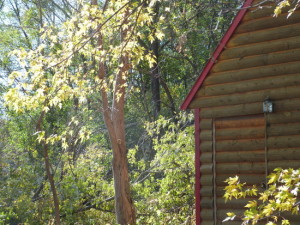 We have not removed ourselves from life in any way, and yet we have reached a place of retreat, a place of safety and of rest, a place away from “normal” life and the lack of freedom you have experienced there. I am your refuge from the past, your gate of entry to the present. You have fled the foreign land, where freedom was merely an illusion, and arrived at the

Promised Land, the land of our inheritance. D:Day9.1

Creating an audio book is such a solitary activity. The other day, as I was re-recording some earlier chapters, I had this thought:

I’ve gotten so much better at silencing the noise around the words.

It was a thought about a technical aspect of working with the audio, but it didn’t stop there. It kept coming back around. It reminded me of a conversation I’d had with my daughter a month before in which I talked of needing a quieter life. She asked, “How could your life get any more quiet?” In terms of lack of noise, my days have been quieter than ever. I couldn’t answer Mia right away but later I did, telling her that “noise” was about more than actual sound or commotion or activity. It is about being aware of expectations, about needing to be aware of other people’s schedules, about things undone, or unspoken. I spoke of the noise of the unresolved of former situations and the pending of new ones; of hopes and questions about the future. All those things that, even when you’re not thinking about them, still exist within you, and even though they can at times reside there quietly, can, at other times, (particularly times of manifestation) live in you as another kind of noise: What’s the “best” way to . . . go forward? (with this, that, or the other thing). “Silencing the noise around the words” sounded so appropriate to all of the words, thoughts and images that were in me. It wasn’t about getting rid of the substance of them, but the “noise” around them.

Yet, while I know what I mean about the lack of noise for having experienced the grace of solitude, that’s not always possible or even desirable. There is joyful noise too. 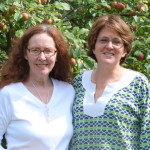 I’ve had an active week, finishing out the audio of A Course of Love, visiting with Rose Gannon, a new Course of Love reader and friend, and putting some final touches on the Dialogue video series that will be launching soon on the Center for A Course of Love website.

Creating and feeling the creation as it happens, in a dialogue between companions, carries a feeling no more wonderful really—but vastly different in feeling—from the writing I more commonly do, and the audio I’ve been uncommonly occupied with. The feeling is one I often describe as overwhelming but that is also fascinating, emotional, enlightening, thrilling, exhausting, and splendid. It holds the energy of creation and is full of the unexpected. “Something” happens. There is a stimulation that causes something new to come to be and that can cause as well, the sense of overwhelm and the exhaustion that comes after. Rose literally trembled with it. Mary Love, who joined us for the video work, added an element of tenderness, tears, and laughter. 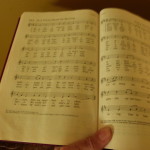 Additionally, being as Rose and I are both Catholic, she and her friends Matt and Mary joined Mom and I for our usual Saturday night Mass. As the first hymn began, and I heard and sang its words, I leaned back, as I was a person removed from Rose, and at the same time, she leaned back, so that our eyes met around the person in between us. I think it started with the first stanza but then happened a second time when the next stanza began:

“We are learners, we are teachers; We are pilgrims on the way. We are seekers; we are givers; We are vessels made of clay. By our gentle loving actions, We would show that Christ is light. In a humble, listening Spirit, We would live to God’s delight.”

It was such a sweet moment! There we were, in church, with its usual ritual and prayers, hearing something that was in “our language” . . . the language of ACOL and of our time together . . . and at the same time in total sync, knowing and sharing our recognition, our awareness of it.

The funny thing is, is that, we—in relationship—are the ones being revealed. Our responses reveal to us who we are. We can become aware of a relationship to a person, a hymn, a feeling, and to 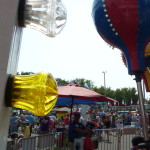 thoughts, expectations, pregnant pauses. I can accept the responses that arise, whether they are feelings of “noise” I’d rather get away from, the noise of the cacophony of State Fair sights and sounds I encountered with my family today, the blur of energetic noise in creativity, the hum of overwhelm, or the tone that is the canticle of joy (E.25).

The more I read and review A Course of Love, the more I’ve come to feel that there’s a constant recycling, or making new, that comes quite literally out of the old. Right away a movement begins that takes us all the way through to the ego-less self. But then it is as if it sends us back (not to ego but into life, or from level ground, to mountain top, and back again) to pick up our discards and to make them new. Done with the way things used to be, but continually not done with the discovery of what can be.

Words of the hymn are from, “As a Fire Is Meant for Burning.”